Utah Mom Buys All ‘Pornographic’ T-Shirts in the Mall 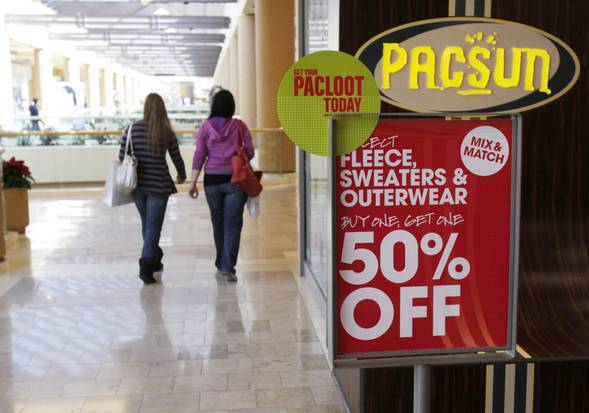 Upset by what she perceived to be “pornographic” t-shirts, a Utah mom decided to solve the problem by simply buying all of the shirts in her local shopping mall.

The incident happened at University Mall in Orem, Utah on Saturday.  The mom, Judy Cox, was out shopping with her 18-year-old son when she spotted the offending merchandise in a PacSun store window:  t-shirts from the store’s “Visual” line featuring models wearing only barely-there lingerie striking provocative poses.

At first, Cox attempted to deal with the situation by asking the store’s manager to remove the clothing from the window but was told that, while the manager was sympathetic to her concerns, it couldn’t be done without first getting approval from the clothing chain’s corporate office.  Not satisfied, Cox took matters into her own hands, purchasing all 19 t-shirts that the store had in stock.   At around $28 each, the purchase set Cox back about $567; however, she notes that she will be returning them for a refund near the end of the store’s 60-day return period.

The Utah mom says that she hopes she will inspire others to speak up and express their concerns to businesses who display what she describes as being pornography to children.  She says that she feels the “indecent” t-shirts being displayed in the mall cross a boundary, exposing children to sexual imagery that they should not be seeing at such a young age.

In addition to contacting the store manager, Cox also spoke with the manager of the mall, Rob Kallas, expressing her belief that the store’s lease agreement enforcement should include displays of nudity, vulgarity or anything that is in conflict local law or community standards.  Kallas says he has talked with the local manager of the store, but it is “hard to police because of freedom of speech.”

For her part, Cox doesn’t see why they have to go through this process if the store is already in violation of their lease terms.

Cox says that in addition to buying up all of the store’s t-shirts, she has also contacted two national organizations for assistance: One Million Moms and Women for Decency. Both groups work to stop the spread of what they see as pornographic materials in the media.

The Utah Mom further says that she has taken steps to share her concerns through her extensive email lists and well as encouraging her friends to get involved in speaking out on a local level.

Commenting on Cox’s complaint, PacSun CEO Gary Schoenfeld said that although customer feedback is important to the clothing retailer, they remain committed to the selection of clothing brands that they currently stock.

Orem, Utah is an highly conservative community which is home to a large population of members of The Church of Jesus Christ of Latter-day Saints. One of the tenets of their religion is that young people should behave and dress modestly.