10 Year Mission to Seek out New Comet: Rosetta and Philae 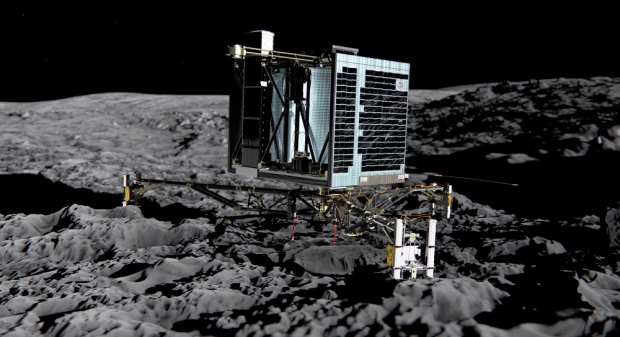 Back in the year 2004, the European Space Agency (ESA) launched a spacecraft on a long-term mission. The 10 year mission was to seek out a new comet, Comet 67P/Churyumov-Gerasimenko, and help Philae, a small landing craft carried by Rosetta, attach to the comet for additional studies. The first two images of the destination comet were taken by the OSIRIS camera. The OSIRIS camera (the Optical, Spectroscopic, and Infrared Remote Imaging System) is a system of two cameras, a wide-angle camera as well as a narrow-angle camera. The Rosetta spacecraft awakened from its energy conserving hibernation in January and the images of the comet were taken by OSIRIS on March 20 and March 21.

The images from the first sighting of the comet for which the spacecraft is aiming were taken from about three million miles away. The two images required a series of 60-300 second exposures over thirteen hours and the data download took over half an hour to reach Earth. Rosetta awoke from a record 957 day hibernation on Jan. 20 after being in a state of hibernation to conserve energy. While the spacecraft itself was reactivated on about three months ago, Philae, a small 100 kg landing craft, was just reactivated on at the end of this week. Contact between Philae and Earth was reestablished with the Lander Control Centre (LCC) in Cologne, Germany.

The intent of the 10 year Rosetta mission is to get Philae to the comet, have it seek out a landing spot and hitch a ride in the hopes of gathering new types of data. The data will come from both the spacecraft which will escort the comet for a year while it orbits the Sun, and from Philae, the landing craft which will attach to the surface of the comet. The hoped-for rendezvous with a comet has not been previously executed by any space program to date. The instrumentation on the crafts will study \the dust, the gas, and the plasma environment of the comet. Additionally, studies will be made on the organic materials of the comet and also on the structure. These will include obtaining information about the gravity, mass, surface geology, and internal structure of 67P/Churyumov-Gerasimenko. Scientists believe that the mission could answer questions about the origin of the water on Earth as well as possibly providing information regarding the origin of life on the planet. They also think that the observations may provide answers about the evolution of the Solar System.

OSIRIS will be regularly taking images as the craft moves ever closer to the target. The images acquired of the next few weeks will allow necessary adjustments to bring the spacecraft’s trajectory in line with the comet’s movement. OSIRIS is one out of 11 scientific experiments which will provide the research details. ESA’s Rosetta project scientist, Matt Taylor, is looking forward to having them all back online and ready to arrive at the comet.

The rendezvous with the comet will take place in just a few short months. Until the August meet-up, a series of preparatory stages will occur. The next three weeks will see inspections of Philae to make sure it is ready for the landing. The preparation of the onboard systems should be complete by the end of April. Beginning in May and lasting until July, a series of braking maneuvers will occur to manage the trajectory and speed of the spacecraft. In July, the instruments will be close enough to the comet to provide the first resolved pictures. The current meeting point of the spacecraft and the comet will be in early August at which point Rosetta will go into orbit around the rock.

After the spacecraft is in orbit around the comet in August, the months following the rendezvous until October will be spent determining a site for landing Philae. At this point, the landing by the small craft onto the comet is set for November. The lander will use ice screws to attach itself to the target. Once the successful landing and attachment of Philae on the comet occurs, Rosetta will begin an escort phase where it travels alongside them both.

The long-term mission is an international ESA mission that has contributions from NASA and its other member states. Philae has a small window of opportunity to take initial images and attach itself to the comet. The small lander only carries 64 hours of battery life for these projects. Once attached to the comet, Philae has solar cells which will recharge the batteries and allow the craft to participate in extended operations. The culmination of Rosetta’s 10 year mission to seek out this particular comet and deploy Philae is coming to an end. The next stages of the mission will continue after that with the type of data never before accumulated on the workings of comets in general and this comet in particular. If they type of data that scientists believe is gathered by Philae and Rosetta, new theories about the origins of the Solar System and life on Earth may soon follow.