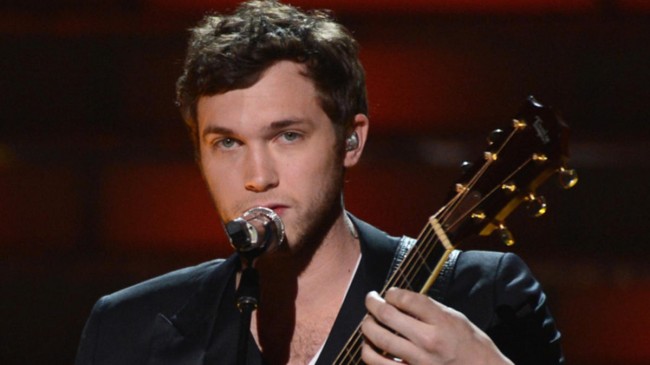 American Idol had its results show last night. The highlight of the evening was definitely when 2012 American Idol winner, Phillip Phillips, sang a new single, Raging Fire, on stage. A video of the performance can be found at the end of this article.

The 23-year-old singer has been working non-stop and is currently still touring; promoting Phillips first album The World From the Side of the Moon. The talented young musician says that the key to success in the music industry is good, old fashioned, hard work. Hard work that has been paying off for Phillips since his Idol win. “It’s been a great two years of touring and the last album is something I’m very proud of.” Phillips said in a phone interview from New York where he is recording his second album. If the album emits the feelings and sound of Raging Fire it is sure to be a pleaser.

The World From the Side of the Moon punched in at number four on the Billboard charts. The hit single Home had a lot to do with the musicians first album going platinum. “I’m very blessed and it’s been a lot of fun.” said Phillips. The Idol winner says that he doesn’t plan to slow down either and will continue to work hard. The singer says that, in this business, you can take a break but “you can’t take too long.” Amidst the American Idol winners success, the young singer seems to remain grounded, feeling grateful and knowing that not a lot of people get to “make a living as a musician.” Phillips said that the singer still gets scared to death each time the musician performs. Judging by last nights performance on American Idol though, Phillip Phillips Raging Fire awful or amazing. “I just do my best and have fun.” said the singer in the New York phone interview. Phillips explains that it gets easier once there is a guitar in hand and the song starts, adding that then, “I don’t have to worry about anything other than the music.”

Along with the musicians touring, Phillips also opened up for big names like John Mayor and Matchbox 20. The singer also found time to perform at a Hurricane Sandy fundraising concert and a rock festival in Rio de Janeiro.

Phillips hot performance definitely stole the show but it had other “highlight” moments as well. Shortly after the American Idol judges sat down, Harry Connick Jr. took a bowl of gummy bears and threw them out into the audience. Connick Jr. has been dubbed the ‘new Simon’ after Idols creator, Simon Powell. Known as the harshest judge, Connick Jr. became excited when Drew Brees, quarterback for the New Orleans Saints football team, appeared on a video screen.  The football star then scolded the Idol judge, saying that Connick Jr. should try to be a bit more kind with the American Idol hopefuls.

Though many thought that MK Nobilette would be the contestant going home, viewers were shocked when it was Emily Piriz that ended up getting the bad news. The real show stopper though, was Phillip Phillips intensely hot performance on stage of the musicians new single, Raging Fire, that captivated the American Idol viewers. Phillips’ constant hard work is certainly paying off.