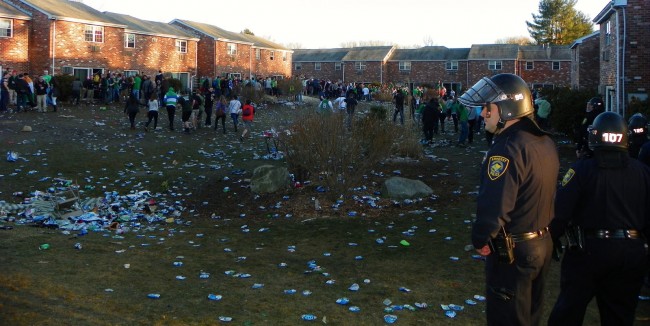 Amherst Police Captain, Jennifer Gunderson, said it was possibly “one of the worst scenes we have ever had with drunkenness and unruliness.” She went on to call it dangerous and upsetting. Four of the police officers involved were injured, although their injuries are not serious. The injuries to three officers came from being hit with beer bottles, and the other officer was injured while making an arrest.

City police, state troopers, and university police combined to disperse crowds. Police were wearing riot gear. The largest disturbance occurred at an apartment complex that is off-campus. The party-goers, who were vandalizing property, were asked by law enforcement officials to disperse. The party-goers responded by throwing objects at the police officers, which included glass bottles, beer cans, and snowballs. At another gathering occurring at frat house, police were again the target of bottles, cans, and snowballs, as well as rocks. When it was apparent that the crowd was dangerous, pepper spray was used to disperse the crowd.

The charges against the 73 arrested by police in the Amherst Blarney Blowout include failure to disperse, inciting to riot, assault and battery on an officer, and disorderly conduct. For the UMass students arrested, it might not end with the arrest.

A spokesman for UMass, Ed Blaguszewski, stated that some of these students may find themselves expelled. The students who were arrested from Saturday’s Blarney Blowout will have their behavior reviewed using the school’s code of conduct. Students face the possibility of being suspended or expelled.

A statement issued on Saturday evening by UMass said, “The University of Massachusetts Amherst today denounced the unruly behavior of participants in the unsanctioned ‘BlarneyBlowout’.” Earlier this week an email was sent out by the school as a warning regarding underage drinking and the consequences of disruptive behavior.

Tom King, chief of state college Pa. police, said that this measure, along with a fraternity ban on parties, led to a significant decrease in arrests and citations. Arrests and citations are down 75 percent from 2011. Last year Penn state offered $5,000 to establishments willing to close their doors during the fake holiday. This year has been a little different. Penn State offered to pay from a range of $2,500 to $7,500, with the amount determined by occupancy.

For the 73 arrested by Amherst police in the Blarney Blowout, their college career is now in the hands of UMass as they await review. Amherst resident, Raul Colon, who helped to clean up the destruction, said that Saturday’s events looked like, “a revolution, like in the countries that have revolutions between the students and the government.”