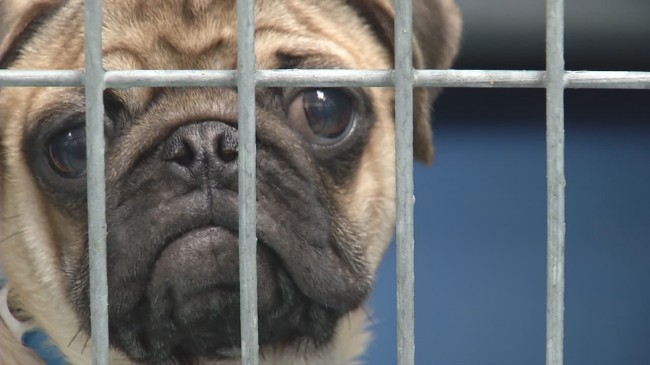 After a judge ruled that both sides in the case of the pet store arson must come to a settlement, an agreement has finally been reached. The puppies were originally placed with The Animal Foundation, who planned to hold a raffle to find homes for the puppies. The raffle was originally set to take place earlier this month, but was put on hold by a civil lawsuit. After reaching an agreement, the raffle for all but two of the arson puppies will happen.

27 dogs were rescued from Prince and Princess Pet Boutique in Las Vegas, Nevada on January 27. The owner of the pet shop, Gloria Lee, and her boyfriend, Kirk Bills, were accused of setting the fire.

The Animal Foundation’s plans to raffle the puppies were put on hold when Donald Thompson, Lee’s estranged husband, filed a civil lawsuit. Thompson hoped to claim the puppies and donate them to a different rescue organization, A Home 4 Spot. Judge Ken Cory, who was hearing the case, determined that both sides needed to participate in a settlement conference in order to reach an agreement.

The agreement that was reached means that the raffle for 25 of these arson puppies will happen. The other two dogs, who are older, will be placed with A Home 4 Spot. The puppies will be spayed or neutered before being sent home. In addition, they will be micro-chipped and up to date on vaccines.

Interested individuals may purchase raffle tickets in hopes of winning a puppy starting on Sunday, March 23 and closing on Tuesday, March 25. Raffle tickets are available for $250, which is the equivalent of each puppy’s adoption fee. Participants must submit to a thorough check before taking home a puppy. The check includes an interview and a home check. If a selected winner is deemed to be not suitable to adopt a puppy, then a new winner will be selected.

The Animal Foundation felt that this was an opportunity to find homes for many of their dogs, not just the pet store puppies. All individuals who purchase a raffle ticket, and do not win an arson puppy, will be able to have the adoption fees waived if they select a different animal to adopt. This incentive will last until September 30, 2014.

The Executive Director for The Animal Foundation, Christine Robinson, said that they receive 110 new animals into the shelter every day. This raffle brings a chance for many more animals, not just the pet shop arson puppies, to be adopted. An individual may purchase multiple tickets, but may only win one dog, even if their name is selected more than once.

Lee and Bills remain held on multiple counts of attempted animal cruelty, along with arson. A surveillance video shows a woman letting a man wearing a hood into the pet store. The woman is seen gathering documents from the store while the man sets fire to the pet shop. Prosecutors say that the individuals seen in the tape are Lee and Bills. While they await trial, which is set for July 7, The Animal Foundation will hold the raffle for the arson puppies.