Backstreet Boys Will Not Tour With Spice Girls 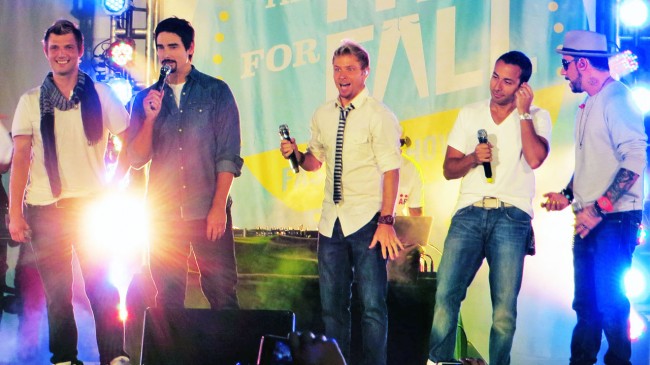 It turns out that the dream of the Backstreet Boys and Spice Girls touring together will not happen after all. While there have been no reasons yet given, but it seems like Brian Littrell’s comments to The Sun may have been fabricated.

A rep for the boy band confirmed that the men were too busy with their own world tour to even think about another one. They have been on tour since May 2013 to celebrate the release of their eighth studio album and 20 years together, and that tour is set to continue until June 2014. Something drastic will have to happen, as the five-piece band has never cancelled a tour without something major happening.

This tour has been the biggest for the Backstreet Boys in some time. It is the first time in seven years that the eldest member, Kevin Richardson, has joined them on the stage and has proven to be the most successful for fans. 1,000 tickets were sold in China in the first minute for Guangzhou date in June last year.

The tour is set to continue until June, and will reach the United States in May this year. At the moment, the singers are enjoying the likes of the UK, Germany and many other parts of Europe. The band will be joined by Canadian singer Avril Lavigne for the North American dates. In recent years, the band has often showcased some of the singers from its own label to open performances.

There are more reasons for the Spice Girls and Backstreet Boys to not tour together. One of those is the cruise for the five-piece boy band at the end of the year. The cruise has become an annual event for the band, and includes various themed nights onboard. Since the cruise will take place over Halloween this year, a Halloween theme is highly anticipated.

There is also the fact that the Spice Girls are no longer performing together, and Victoria Beckham made it clear in 2008 that she would not like to perform with her former band mates again. She did break that rule for the sake of the London Olympics, where the five-piece UK girl group sang in front of a traditional London black cab, but it seems like that was a one-time only thing.

Each of the five women have their own lives and opportunities now. “Sporty Spice” has recently been working on her own solo career, while other members of the group have appeared on reality shows to judge talent, including Britain’s Got Talent and X-Factor. There are hopes that they will get together again during this year to celebrate their own 20th anniversary.

Many fans of the two groups will be disappointed. The idea of two high-profile bands from the 90s getting together for a world tour was extremely exciting, and there were already people wondering just how it would work. However, it seems like the “early talks” were just rumors, and the Backstreet Boys and Spice Girls will definitely not tour together.