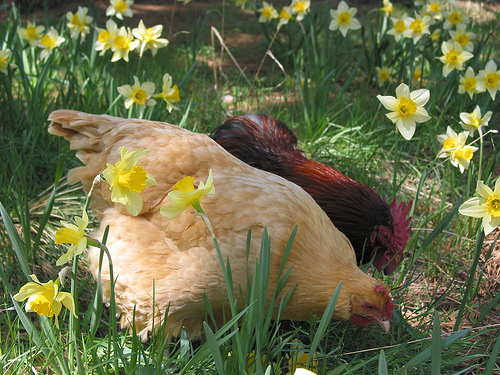 Knowing where your food comes from is becoming increasingly important to Americans. Self-sustainability is coming back into vogue, and raising a backyard chicken flock is becoming all the rage. People are searching for ways to ensure that the food they eat is healthy and wholesome, and are longing to depart from the chemicals and preservatives that are rampant in the processed, pre-packaged foods that so many of us have come to consume on a daily basis.

There is no way to know for certain how many Americans own backyard chicken flocks. In a study conducted by the Center for Disease Control, across four cities, studies found that nearly 1 percent of households presently had a flock of chickens, and another 4 percent were seriously considering acquiring one.

Maria Leis of Sparta, WI, is a mother of two who raises a small backyard flock with her two sons, says she likes the experience they are having of caring for living creatures, and learning where their food comes from. “I enjoy having the chickens,” says Leis. “It is fun to watch them. They each have their own personality. And it takes about a half hour of our time to clean the coop, water and feed them. It is so rewarding to take care of them and harvest their eggs.” Leis continues her story, saying that she never thought it could be so challenging to care for chickens, dealing with illnesses, the harsh winter the Midwest experienced, and the earlier heat of last summer.

Chickens raised in backyard facilities are likely to be organic in their egg production. In addition to being able to choose organic chicken feed, the birds augment their diet, and benefit their owners, by providing natural pest control. Chickens scratch and peck for pests such as grasshoppers, fleas, ticks, slugs, spiders, mosquitoes and their eggs and other insects. Chickens may also eat small snakes and mice, removing them from the environment.

With this food source revolution in vogue, today there are thousands, maybe millions, of chickens quietly pecking away in backyard flocks throughout the country. However, despite the growing popularity of backyard flocks, many towns and cities have ordinances against raising a backyard flock, and debate about having flocks within city limits is growing.

Issues that face communities are as wide and varied as the varieties of chickens that are available to up-and-coming flock-keepers. Questions regarding limits on the number of chickens allowed; whether or not roosters are permitted; size, construction and location of coops; feed storage and sanitation issues all face municipalities looking into the question of legalization of the backyard chicken phenomenon. Also playing into the equation is the question of the need for permits to allow for regulation, and how that regulation would be performed. Communities need to balance the desire of some to be self-sufficient with the overall health and safety of the community.

Despite the benefits of a backyard flock, there are drawbacks and concerns to take into mind as well. An increase in the risk for salmonellosis is a possibility, although it is preventable with proper precautions, according to researchers. Salmonella bacteria are a normally occurring organism in the intestinal tract of poultry, according to Dr. Casey Barton Behravesh of the US Public Health Service. While this bacterium does not typically cause illness in the birds, it is present in their environment and can lead to sickness in humans.

Bringing young chicks into living areas, cleaning feed and water containers in the household kitchen and playing and handling the birds can lead to increases in disease transmission.  Especially for children, the introduction of chickens can be an exciting adventure, and they may tend to view the birds more as pets than as production livestock. They may be prone to handling the birds, and exposing themselves to the bacteria.

As long as backyard chicken keepers are aware of proper handling procedures and careful with sanitation, raising a backyard chicken flock may just be the vogue link needed to connect consumers to their food sources.