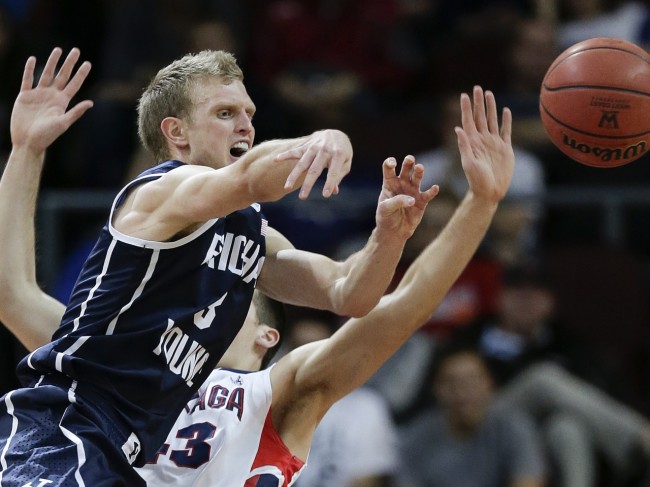 The Cougars have played in the post-season nine years in a row now, seven of them in the NCAA tournament under head coach Dave Rose. They reached the semi-finals of the NIT in post-season play last year, losing to Baylor at Madison Square Garden 76-70. This year’s appearance for the Cougars in the NCAA tournament will be their twenty-eighth. Their first entry was in 1950, and BYU is 15-30 all-time in the tourney. Their best showing was in 2011 when they reached the Sweet 16 behind National Player of the Year Jimmer Fredette. They last appeared in the NCAA tournament in 2012, getting a win in their first game over Iona.

The Cougars are a number-10 seed, and their first game will be a re-match against the Oregon Ducks.  The two teams played in December in Eugene, OR, with the Ducks winning in overtime 100-96. This matchup is Thursday in Milwaukee, with the winner advancing to play the winner of the Wisconsin/American game on Saturday.

Who’s Hot:  BYU is third in the nation in scoring, with a 84.2 point average per game, and sixth in rebounding at over 41 per game.

Who’s Not:  Defense is not a strength for the Cougars, giving up 77 points per game. That is no. 324 in the nation. They are not a strong shot-blocking team either, ranking no. 234 with three per game.

Outlook: The Cougars gave a strong showing in the WCC tournament, losing in the finals to perennial powerhouse Gonzaga 75-64.  There is reason to be optimistic for their opening game, as they gave Oregon all they could handle earlier this season, losing by four points in overtime.  That game was on the Ducks’ home court, and the Cougars are hoping the neutral site will be an equalizer.  There is also the revenge angle to be factored in.  When handicapping games in the NCAA tournament, many predictors like to find hot teams, and BYU is a team that certainly qualifies.  The Cougars were 10-1 before their loss to Gonzaga in the WCC championship game.  This time, though, BYU will be without the services of guard Kyle Collinsworth because of knee injury suffered in the WCC finals.  Collinsworth led the team in rebounds and assists, and was second in scoring.  Although head coach Dave Rose hasn’t officially announced his replacement, it will probably be Matt Carlino.  The 6-2 175 lb. guard is second in assists behind Collinsworth.  No matter what the outcome of the Cougars’ game with Oregon, the winner will have a monumental task ahead of them.  The winner will probably go on to face number the two seed Wisconsin, who will have a rowdy home crowd cheering them on in Milwaukee.