Chuck Norris Gets Older, but Older Does Not Get Chuck Norris: Legend Is 74 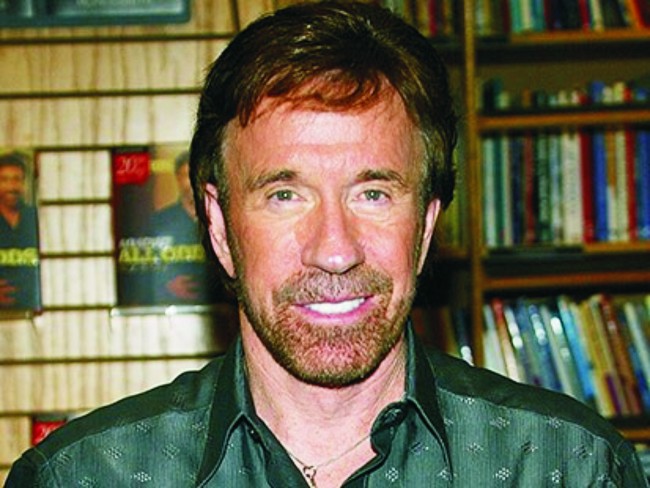 Chuck Norris jokes have been all the rage for years; he has practically become his own genre of comedy, affectionately referred to as “Chuck Norris Facts.” The  jokes are typically framed around the idea that Norris is essentially an immortal ninja with unspeakable superhuman powers. If this seems like too much fanfare for one (kind of old) guy, naysayers should probably look at Norris’ biography, and then drink down a 12 ounce humble-smoothie. Because he is a fitness guru, it would simply be disrespectful to consume pie here.

With several screen credits, including 8 years as the honorable Walker, Texas Ranger, several years of martial arts training (both as a teacher and student), a home-gym empire, and more than 3 million Facebook fans, to merely call Norris accomplished would be a put-down. The 74-year-old has been in the public eye for decades, and will be immortalized thanks to the never-ending stream of Chuck Norris jokes, and of course, his work in the 1992 smash-hit Sidekicks.

But Chuck Norris is not all roundhouse kicks and pithy comments. It is easy to see his stone-faced Chuck-Norris-stare and write him off as a no-nonsense kind of dude, but that point of view is simply wrong. Those who venture out to Norris’ official website can immediately see that he has made sides to him. First there is his sense of humor; Norris’ site has a section that rotates different Chuck Norris jokes. Then there is his faith; though he is proclaimed in his joke series as an omniscient superhuman, the martial artist is actually a devout Christian.

Norris’ site has an entire section devoted to Christian living, meaning though he can conquer any bad guy around, he also made the decision to reach out to a good guy that he feels is bigger than himself. But for those that swear by the Bible’s little-known book of Norris, rest assured that Chuck probably just joined forces with God. Nonetheless, not only does Norris reach out to share his faith on his site, the legend also spends his free time volunteering with organizations like Make-a-Wish. At 74, Norris is not just getting older, he is getting more generous.

In honor of Norris’ 74th birthday, fans across the Twitterverse decided to chime in with their favorite “Chuck Norris Facts.” Here are some things to know about Norris, according to Twitter fans: his birthday candles extinguish themselves, his gaze is brighter than the sun, and the boogeyman fears him. Norris does do some tweeting himself, but most of his posts are thank you messages to fans for their support and other related sentiments. Some day maybe Chuck Norris jokes will be old news, but if that ever happens, the apocalypse will probably be in progress. Meanwhile, the legendary actor may be getting older, but he is still pretty hardcore.