Expectant Mother Drives Children Into the Ocean With Murderous Intention 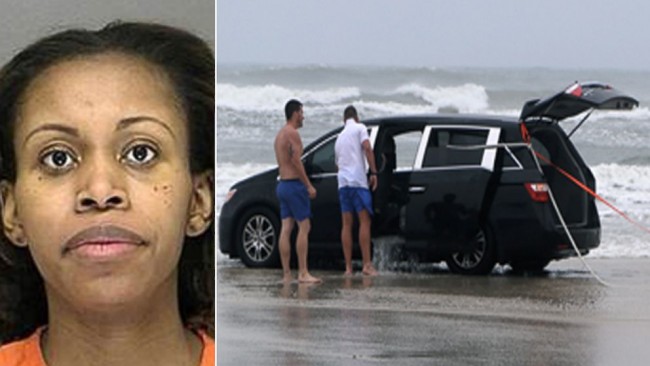 Expectant Mother, Ebony Wilkerson, had murderous intent when she drove her vehicle, filled with her children, into rough ocean waters.  The 32-year-old mother of three entered the Atlantic ocean through a Florida surf.  She attempted to submerge her children, ages three, nine, and ten, in the troubled waters before they were frantically rescued.

Wilkerson is approximately seven months pregnant and was staying with her sister, Jessica Harrell, in Florida before committing the heinous act.  The expectant mother filed reports on March 2 stating she was attacked by her husband in South Carolina, the state in which she resides.  The occurrence of the attack is what triggered Wilkerson’s stay with her sister.  Harrell noticed bizarre behavior exhibited by Wilkerson and notified 911 once the expectant mother left her home.

Wilkerson portrayed obvious signs of discomfort concerning the control she had over her mental status.  This is clearly present when she attempted to voluntarily check herself into the Halifax Health Medical Center on March 3.  She made the final decision not to check in and left the facility, despite her family urging her otherwise.    On March 4, after receiving the distraught phone call from Harell authorities were able to track down Wilkerson. Harell relayed that Wilkerson is displaying signs of psychosis or postpartum and continues to rant about Jesus and Demons.

Moments before the incident took place authorities made the decision she was lucid and not a danger to herself or others. Wilkerson gave commentary that she was fearful of her husband traveling to Florida to harm both herself and her children.  She did not fit the criteria of the Baker Act, which allows involuntary institutionalization in order to analyze an individual for mental illness.  The expectant mother pulled off and shortly after drove her vehicle into the Atlantic ocean with the murderous intention of harming her children.  She told the children to she was taking them to a safer place and to close their eyes.

While inside the vehicle her nine-year-old son began vigorously battling for control of the steering wheel. The children began screaming that their mother was trying to kill them and that they needed help. Two bystanders and three lifeguards swarmed the car in an attempt to rescue the family.  Wilkerson locked all the doors and would not roll down the windows as the car pushed out to sea. Stacy Robinson, 21, is one of the bystanders that swiftly moved into action by reaching in a slightly open back window to unlock the door.  Robinson rescued the two oldest children and the other lifeguards and bystander retrieved the 3-year-old and the mother.  Wilkerson’s two oldest children stated that their mother is a lunatic and tried to kill them on purpose.  Wilkerson is charged with three counts of child abuse and three counts of attempted murder setting her bail at $1.2 million.  An expectant mother who drives her children into the ocean with murderous intent deserves every penny of a million dollar sentence.