By Rebecca Savastio on March 20, 2014Comments Off on Fred Phelps’ Death Brings Rejoicing on Social Media 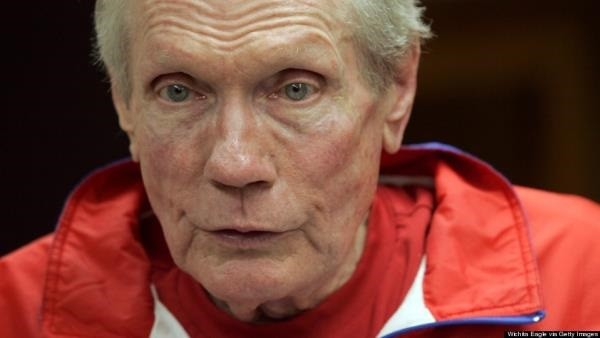 Fred Phelps was born in November of 1929 and died today, leaving a legacy of hate, terror and misery in his wake.  His death is bringing a significant amount of rejoicing on social media. Phelps’ insanity began early on his life, when he attended a fundamentalist Christian prayer service as a teen and decided to become a minister. While in college in 1951, he spoke against “promiscuous petting … evil language … profanity … cheating … teachers’ filthy jokes in classrooms … [and] pandering to the lusts of the flesh.” Obviously, this radically puritanical man had a screw loose from a very young age.

Surprisingly, though, Phelps began his career as an attorney by becoming deeply involved in civil rights. He once claimed he challenged Jim Crow laws “singlehandedly” and was involved in representing many African Americans against discriminatory practices they faced. Believe it or not, he actually sued President Reagan after Reagan appointed a government official to the Vatican to act as ambassador. Phelps alleged this represented a violation of the concept of separation of church and state.

As shocking as it is that Phelps was concerned with anyone’s civil rights as a young man, his behavior later in life was a million times more shocking. He often picketed gay people’s funerals as well as the funerals of members of the military. He and his congregation would carry signs that stated “God Hates Fags,” “Thank God For Dead Fags,” and similar messages of hate. He also carried signs at military members’ funerals saying “Thank God for Dead Soldiers.”

One of the most heinous acts Phelps participated in was picketing the funeral of Matthew Shepherd, a gay teen who was viciously tortured, murdered and left to die. Shepherd’s devastated parents had to endure Phelps and members of his congregation picketing their beloved child’s funeral. Other families have described the emotional pain inflicted upon them by Phelps and his congregation as “unbearable.”

Before Phelps’ death, debate was raging on social media as to what the reaction of the gay community should be. Some said Phelps’ funeral should be picketed while others said he should be forgiven. Still others thought it would be best for everyone to completely ignore both his death and his funeral. Since his death earlier today, many have been calling for a protest of some kind, though no definite plans have been announced.

Fred Phelps’ death has brought much rejoicing on social media, with people taking to different sites in droves to say “good riddance!” to the nearly universally-despised man. Some who have not been directly affected by Phelps’ actions state that it is not right to rejoice in the death of any person, but that’s easy to say for those who have not experienced the tremendous emotional pain and torture Phelps dished out during his miserable existence.

Social media reaction was swift and plentiful, with many people taking to Facebook, Twitter and other outlets to express their feelings about Phelps’ death:

“In an age where America is supposedly at war on terrorism, the Supreme Court upheld the legality of domestic terrorism when it supported Fred Phelps efforts to cause deliberate distress to private citizens at their most vulnerable moment, when grieving the loss of a beloved family member. Shame on Phelps, and shame on the courts.” –Dave Schwartz

“I can only hope Rev. Phelps is unique in that he will be the last of his bigoted, hateful, irrelevant line.” –Monica White

“He made me want to question the right to free speech. How scary is that?!” –Kathleen Proud Keyte

“I would like to thank Rev. Phelps for showing America what bigotry looks like when taken to its logical extension.” –Pete Mullin

Other commenters under news stories about his death indicated they thought he would be going to the very place he condemned so many others to–hell. Others pointed out that Phelps’ failed to live like a true Christian and that he will suffer the consequences. Many on social media said they were rejoicing at his passing. For the families directly affected, on commenter pointed out, true healing can now begin.

Fred Phelps’ death is bringing rejoicing on social media and under news reports about his death. The truth is, the world is much better off without Fred Phelps, and those who have been hurt by him have every right to be angry. Fred Phelps is dead at the age of 84, and much rejoicing is taking place all over the world in communities who can now finally begin to heal. Hopefully, Phelps’ death will signal demise of the Westboro Baptist Church as well.