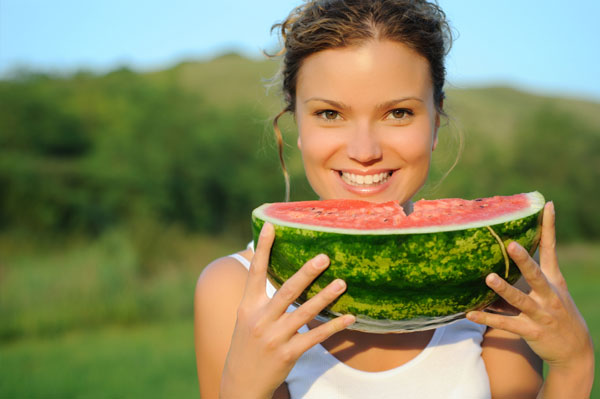 High blood pressure affects many Americans every day. Arturo Figueroa, an associate professor at Florida State University, learned that hypertension can be lowered by consuming juicy watermelon in people who are overweight when they are at rest and stressed. The study did not begin with watermelon but with a concept. The concept was that more adults die from heart attacks in the winter because the stress of the cold temperatures causes a person’s blood pressure to rise and the heart has to work even harder to pump blood into the aorta, which usually leads to less blood flow going to the heart.

This concept explains how people with high blood pressure and obesity have a higher risk for heart attacks as well as stroke when they are exposed to the cold either during cold weather or when they are in a room where the temperature is cold. The study examined 13 obese women and men who were middle-aged and suffered from high blood pressure. The 12 week study first had each participant stick their hand in 39 degree water to simulate cold weather conditions and had their vital signs as well as blood pressure measured by members of Figueroa’s team.

The participants were then separated into two different groups: one of the groups was instructed to take four grams of two amino acids, L-citrulline and L-arginine each day for six weeks. Those amino acids are found in watermelon extract. The other group took a placebo, or a medication that does not affect a patient physically, for six weeks. The groups then switched six weeks later. Professor Figueroa said that watermelon is the highest, edible natural source of L-citrulline, an amino acid that is responsible for the formation of nitric oxide, which is important for healthy blood pressure and the regulation of vascular tone.

During the study, participants were not allowed to take any medications for their blood pressure or make any lifestyle changes, especially related to their diet and exercise. The results of the study showed that consuming juicy watermelon does have an impact on blood flow in the arteries as well as other factors impacting the blood vessels. Participants also showed improvement in cardiac stress and blood pressure while they were exposed to cold water and when they were resting. Researchers on his team also found that the blood pressure levels that were lowered could be considered within normal range. Figueroa said that the study means that the heart does not have to overwork itself and will have an easier time working during stressful situations such as the exposure to cold weather.

Figueroa and his team at Florida State University studied 13 individuals to see if consuming juicy watermelon could lower their high blood pressure. The participants took two types of amino acids that are found in watermelon extract for six weeks. They were also exposed to cold temperatures by dipping their hand in cold water to simulate cold weather temperatures. They found that the extract improved their cardiac stress, blood pressure and impacted blood flow in their arteries. These results prove that a person’s blood pressure can be lowered by consuming juicy watermelon. Figueroa has studied this extract in the past when he studied it in the artery function of pregnant women and the blood pressure readings of adults who have pre-hypertension.