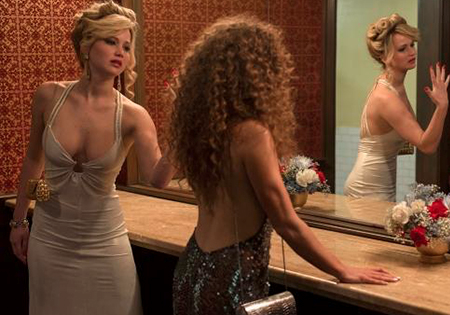 America’s “Girl Next Door” Jennifer Lawrence has taken a tumble again and her Oscars fall take two was captured for posterity and posted on YouTube. We’ve included the footage of the 23 year-old American Hustle actress falling yet again at the Academy Awards; this time on the red carpet as she headed toward the awards ceremony.

This year’s Oscars event, the 86th Academy Awards, seemed like a repeat of Lawrence’s fall when she went to accept the little gold statuette for her role in Silver Linings Playbook. The Hunger Games star fell last year and it served to make the popular actress even more adorable and human. The Oscars usually manage to catch a lot of the participants unaware, but few have handled it with such aplomb and matter-of-factness as Lawrence did at last year’s ceremony.

Jennifer is up for Best Actress in a Supporting Role for her part in American Hustle where she starred with her Silver Linings Playbook co-star Bradley Cooper and worked again with that film’s director David O. Russell. She was asked, after her fall, about Russell and how much she enjoyed working on the film.

After singing short praises for her director the actress went on to say that she’d checked her dress for “going up stairs” and then admitted to falling over a cone on her way up the red carpet. E! Livestream caught Jennifer when she exited her limo and stumble over a cone. She almost knocked down a woman in front of her as she reached out to catch her balance.

Lawrence, who is famous for being down-to-earth, laughed the stumble off. Jennifer reacted exactly as she did at the last Oscars ceremony and it felt a little like take two of Lawrence falling. She did recover a lot faster this year, in her red Dior gown, by not taking a moment to cover her face like the last time.

Academy Awards host Ellen DeGeneres joked about the issues that Lawrence seemed to have with staying on her feet at the Oscars. In her opening monologue Ellen reassured Jennifer that they might try to bring the statuette to her. After making the quip, DeGeneres then asked if they could do that.

Counting Lawrence’s nomination for Best Supporting Actress, American Hustle is up for a total of 10 nominations tying the film with Gravity. Co-star Amy Adams, who is also up for an Oscar as Best Actress for her role in the film, spoke of the kissing scene she had with Jennifer.

The 39 year-old actress revealed that the kiss was a “disaster” and that it was done in two takes. Adams said that Lawrence was wearing “bright, bright raspberry” lip gloss. Amy laughingly recounted that, after the kiss, the gloss wound up surrounding her mouth because of Jennifer’s “very full lips” and that she, Adams, ended up looking like a clown.

Luckily for both actresses they did get the two take kiss “in the can” with a minimum of muss and fuss. Both ladies will obviously be cheering the other on during the ceremony and after Jennifer Lawrence’s second Oscars fall in two years, she will most likely be praying that if she wins she can keep on her feet. Although Ellen did say she would take the award to her, it is unlikely that the organisers would pass on another “history” making moment at the 86th Academy Awards.