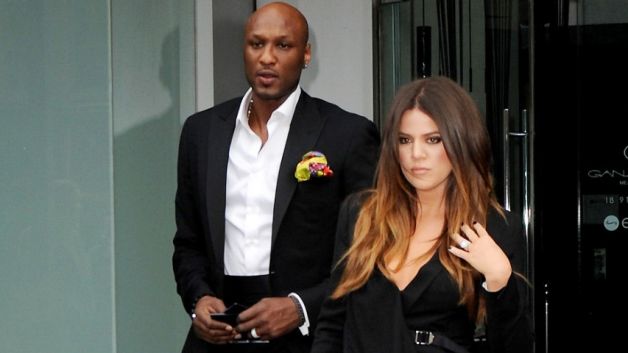 Khloe Kardashian cannot escape the aftermath of Lamar Odom’s drug habit.  Trailing the rumors of multiple infidelities and unmanageable addiction, Kardashian depleted the marriage of four years.  2013 bought to the forefront hidden personal emotional battles Kardashian fought during her marriage.  Glimpses of Odom’s bizarre behavior were captured during phone calls that were broadcast on Keeping Up With The Kardashians.

The youngest sister of the Kardashian clan is known for her sharp blunt tongue and comedic behavior.  The reality star is relying heavily on these characteristics to shield herself from scrutiny.  Innuendos of Odom’s intransigent drug use began surfacing several months before his DUI arrest in August 2013.  Odom’s drug binge may in part be attributed to entering free-agency at the end of the 2013 season.  Sources have reported that Odom entered into an abyss of hardcore drug usage and did not always pay for his product.  Odom allegedly relied on his celebrity status in order to receive a pass from paying for the illegal substances.  When this was unaccommodating, he would claim that the narcotics were not up to par in order to excuse his action of not compensating the dealer.

Odom allegedly stiffed several illegal product peddlers in sums reaching $55,000.  Before accepting the contract to play basketball over-seas in the Spanish League, the former NBA star was receiving threatening messages.  These peril warnings allegedly sent by Odom’s traffickers forewarn a break-in in order to settle the basketball stars debt.  Odom reportedly ignored the hazardous remarks and relocated to Basque city of Vitoria-Gasteiz (city in Spain).  Less than one month after publicly accepting the contract to continue his career in Spain, the mansion he and Kardashian once shared was robbed.

Kardashian and her mother, Kris Jenner, discovered the robbery earlier this week on Monday.  The two Keeping Up With The Kardashian stars were cleaning the home preparing the mansion for the buyers that purchased the property.  Kaley Cuoco, of The Big Bang Theory, and Hubby Ryan Sweeting, professional tennis player, are the newlyweds set to move into the home.  Kardashian reported that appoximately $250,000 worth of property has went missing.  There were no signs of forced entry and the heist apparently seems to resemble an inside job.  The Kardashians have a variety of associates and employees that have access to the home; it is possible that a close counterpart may have played a role in the robbery.  Khloe is not the only Kardashian bedeviled by the robbery bug; her sister Kourtney Kardashian has been affected as well.

The mother of Mason and Penelope reported $50,ooo in cash was burglarized from her Calabasas home last month.  Each crime is currently being analyzed for possible connections to each other.  At this time no one has been apprehended in either case.  The speculation will continue until LAPD can move beyond a person of interest.  A tangible individual that is not a shadow of a possible disgruntled dealer lurking in the balance.  With no suspect in custody, Lamar Odom’s drug addled year sits at the pinnacle of the Kardashian robberies.