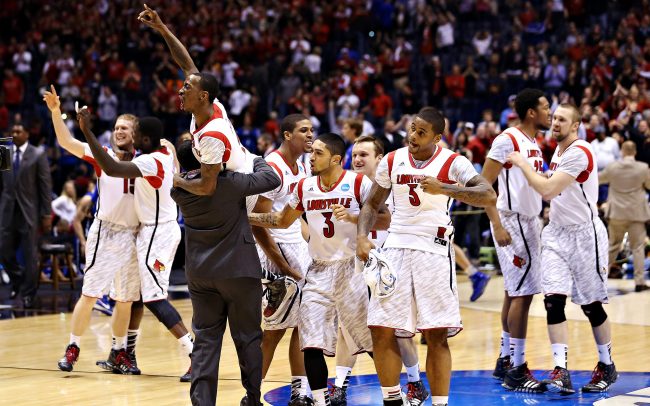 Coming off of the taste of complete victory, The Louisville Cardinals are on the way to another. That is the perspective of most sports analyst as of pre- season and mid season. This team has stepped up, and did not disappoint. There regular season performance is proving that they can live up to the hype that surrounds current champions. The Cardinals are currently number one in The American Atlantic Conference with a 29 – 5 record. There were many questions revolving around the departure of Peyton Siva, and how they could recoup.   Louisville  answered with Chris Jones who filled the gaps just fine, averaging 10.3 points per game and 3.1 assist per game also. This was a fine addition to and already oiled machine. Russ Smith, one of the leagues premier players, had a season that sparked off this incredible record by the  Cardinals. He averaged 18.3 points per game with a .475 field goal percentage. Smith’s performance was reflective of the complete team effort displayed day in and day out. The kind of push this team was receiving from all of their core players has propelled them to possibly take another Tourney Win. With a strong win against Connecticut on March 15th, the team has taken another strong step towards reclaiming their title.

Who’s Hot: This team is clicking on all cylinders and their role players are in full affect (Russ Smith, Luke Hancock, Chris Jones). These guys are showing the type of fight and determination that champions are made of. Smith is leading the team in scoring, plus the effort’s of Jones is helping everyone get there shot off.   The  Cardinals seem to have a clear plan for every match up.

Who’s Not: Though many have found it hard to identify a weakness in  Louisville,  there is one lingering. The Cardinals have been weakened by the departure of their power player Gorgui Dieng. It seems that with a little defensive pressure most teams, mainly Cincinnati, have found a way to disrupt there flow. With this fatal flaw, they can be easily taken advantage of.

Outlook: The Louisville Cardinals have managed to keep a strong hold on their spot in the final dance. As long as the team can continue to be consistent in all areas they should be a shoe –in. The numbers from Smith, Jones, Harrell and the others will solidify them on offense. Plus, the added modifications made to adjust their defense will make them hard to beat. This team should make it to the finals.