Mark Sanchez Future in the NFL 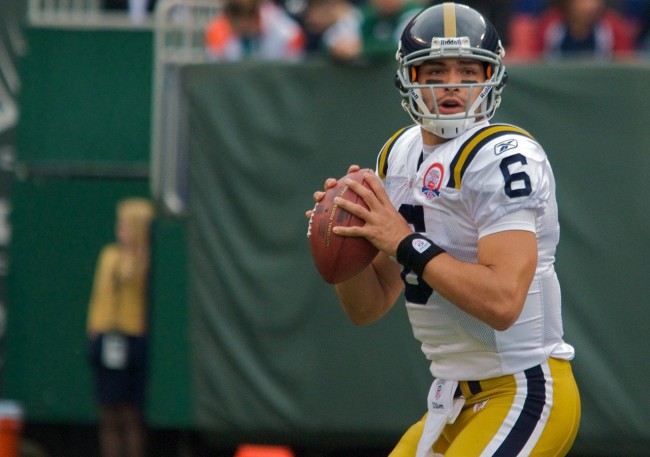 On Friday the New York Jets cut Mark Sanchez and left his future playing in the NFL a big question mark. It was widely known that the Jets were expected to cut him, and with the signing of Michael Vick on Friday, it was no surprise when he was released; he was not seen as the starter and his release saved the Jets $8.3 million in cap room. With four years of experience and playoff wins under his belt he is a desirable candidate for teams looking to find a plug and play starter, or an experienced back up. Unfortunately for the former USC player, by the time the Jets released him many of these teams filled their vacancies at quarterback. Coming off of season ending shoulder surgery, and the worst season of his career, Mark Sanchez’s possible landing spots in the NFL show a bleak future.

The New York Jets drafted the USC quarterback fifth overall in the 2009 draft. The Jets traded up to get him, putting the future of their team in his hands. Facing little competition in training camp, he was named the Jets opening day starter and became the first rookie quarterback to win its team’s first three games of a season since 1969. Powered by a strong run game and dominant defense, the Jets made the playoffs that year as the number six seed, eventually losing in the AFC Championship game. Sanchez played great as a rookie during his first playoffs, completing passes on 60.3 percent of his throws, and adding four touchdowns and only two interceptions. The following year he led the Jets to a record of 11-5, throwing for almost 3,300 yards and 17 touchdowns. Once more he played great in the playoffs leading the Jets to wins over Peyton Manning’s Indianapolis Colts and Tom Brady’s New England Patriots, only to lose again in the AFC Championship. During those playoffs he completed passes on 60.7 percent of his throws, and threw five touchdowns with only one interception. After his first two years with the Jets, fans gave him the nickname, Sanchize, which is a play on words, combining his last name and franchise quarterback.

The Sanchize’s next two years in the NFL were not as encouraging. He set career highs during the 2011 season in passing yards (3,474), passing touchdowns (26) and six rushing touchdowns. Unfortunately, he also threw 18 interceptions and the Jets finished with a record of 8-8, missing the playoffs. The Sanchize was asked to do more that year since he was a game managing quarterback his first two. But the defense was not as dominant and the run game had trouble gaining yards. Ultimately it put more of the load on their quarterback’s shoulders. Since his numbers were still improving, the Sanchize was expected to continue to be the Jets starter, but the team went out before the 2012 season and signed Tim Tebow. The signing turned the team into a media circus and became a distraction within the locker room; Tebow running in the rain without a shirt was the top story on ESPN one day. The two battled, but Sanchez won the starting job. That season his numbers regressed and the Jets finished 6-10, missing the playoffs. He threw five more interceptions than touchdowns that year, his completion percentage and total yards dropped, and he was benched for the first time in his career. In the 2013 draft the Jets selected quarterback Geno Smith in the second round to compete for the starting job. Last year the Jets’ incumbent quarterback was winning the competition through training camp until he was injured in their third pre-season game, resulting in shoulder surgery and ending his season. After being cut by the Jets, Mark Sanchez’s options to start in the NFL are growing slimmer, and his future is not what everyone had once expected.

This past week the Oakland Raiders traded a late round draft pick to the Houston Texans for their quarterback, Matt Schaub. Sources indicated that the Raiders wanted to sign either Schaub or the Sanchize once they were cut. Either would have been a fine fit, but Schaub has more experience, which ultimately made the Raider’s decision easy; make a trade and guarantee they get him. Since the Jets waited so long to release him, most teams filled quarterback vacancies as well, leaving few possible destinations for the former USC quarterback.  His old offensive coordinator, Brian Schottenheimer, holds the same position for the St. Louis Rams and they have a good run game as well as young, explosive receivers. Their starting quarterback, Sam Bradford, had ACL surgery but is expected to recover in time for the start of the season. This leaves only their back-up quarterback position open. The same can be said for the Chicago Bears. Their quarterback, Jay Cutler, is coming off of a surgery, but is expected to be ready for the season opener. The Sanchize’s old quarterback coach, Matt Cavanaugh, is the quarterback coach for the Bears, but again, this would only be a back-up position. When he was at USC Pete Carroll was his coach, and he now coaches the Super Bowl Champion Seattle Seahawks. Their starting quarterback is set in stone for Russell Wilson, and they just signed Tarvaris Jackson. Any goodwill towards his old quarterback from Carroll would result in either a back up, or third string position. The best options for Sanchez is either the Cleveland Browns, or the Jets division rival Buffalo Bills.

The Bills current quarterback situation is a mess. Their second year starter, EJ Manuel, is coming off an injury plagued, and disappointing, rookie year. The rest of the team’s quarterbacks lack the experience to push Manuel, let alone win the starting job. The Bills have talented receivers, two good running backs and an improving defense. The ex-Jets quarterback could do well there and have a real chance to win the starting job. But his best bet is with the Browns. Before the Raiders traded for Schaub the Brown were very interested in him. Schaub is a good quarterback, but not elite; he is more of a game manager. The Sanchize could fill that quarterback need nicely. The Browns’ defense is one of the better units in the league, they just acquired Ben Tate at running back and their young receiver, Josh Gordon, is one of the best in the league. The ex-Jet quarterback would not be expected to carry the team, rather manage it, similar to what he did in his first two years in the league. In a lot of ways, the 2014 Browns look similar to the 2009 Jets. Cleveland does have the number four pick in the draft and they could easily draft a quarterback, eliminating that spot, but it is the Sanchize’s best option until then. For his four-year playing career, the ex-Jet quarterback averages 3,023 passing yards, a 55.1 percent completion rate and 17 touchdowns and interceptions. Regardless of what happens, Mark Sanchez will continue to play in the NFL; it is his future team that remains the question mark.