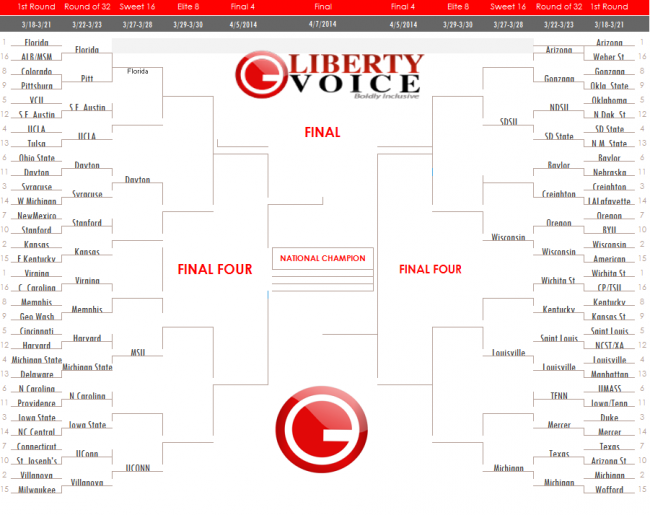 Sunday has come and it is time for the Sweet 16 to emerge from the pack.  Some of our writers ssem to be fortune tellers, and some of us seem to be hopelessly ideal.  Check out today’s updates.

Tell them you love them or hate them on twitter! (#MarchmadnessGLVChallenge)

Mr. Olson is still rolling strong from abroad.  His Final Four is in tact for now, but we will see if sunday makes him look like a hero or a fool.

Oddly enough I am doing ok. Half of my Final Four are safely tucked away in the Sweet Sixteen with a couple more to follow today I hope. I am still upset with myself for not picking Dayton but otherwise my bracket is good. Obviously today will really tell the story on our brackets. Good luck everyone!

The flip-a-coin bracket seems to bew working out well.  My only flaw, and it is a big one, is the loss of my champion.  Who new Dayton could fly so high?

Another good day of basketball has passed, but my bracket took another few hits. Not many people – including me – saw Dayton doing this well in the tourney, and their defeats of Syracuse and Ohio State are very impressive. I predicted that a highly talented Oregon team was going to make it to the Elite 8, but they lost to Wisconsin.

Kudos to Michigan State, San Diego State, Michigan, Louisville, and Florida for keeping my hope alive and winning on Saturday. I still have Michigan State winning it all; which they will eventually do.

Can you hear that sound? That is the sound of Rob’s victory train rolling out of the station. In all seriousness, the first part of round three was very good for me. I had 6 victories Saturday, with one of my “losses” being because Dayton had already knocked out Ohio State, and I had them in the Sweet 16, and the other was Villanova falling to UConn in the late game. That leaves me with an overall record of 31-9. Sunday I have 1 automatic loss, because of the Magnificent Mercer victory over Duke, who I had in the Elite 8. 6 of my games I am pretty confident about, including Wichita State over Kentucky. I am calling for North Carolina to beat Iowa State, and that is my one concern.

Shockers can me look good today with a  tough win over Kentucky.  If I lose my champion, I will be very shocked.

At the sound of the buzzer the score was 61 – 45, and the stage was set. Florida Gators are moving on to the sweet 16. The Panthers put up a respectable effort but it was not enough. Scottie Wilbekin set his sites on a victory and carried the team on his back. The star point guard scored 21 points, not to mention it was 11 of the teams 13 in a 7-minute stretch. However, the Panthers were not completely helpless in the match up. They put up a strong fight and gave the Gators a scare in the first half. Pittsburg shot 37% and the game was close but it came down to the last minutes. Wilbekin hit the three at the buzzer to extend the Gators lead past two. That big shot at the half set the tone for the remainder of the game. Moving forward the Gators never abandoned their game plan they continued to pound the paint. Plus, The Gators played the defense Coach Donovan spoke of in their prior game. Patric Young made a strong defensive statement with his chase down block and points in the paint. Michael Frazier II, Will Yeguete, Casey Prather also had there hands on the game, and were instrumental in this necessary win. Most people would agree when the Florida team is playing like this they are hard to beat. Therefore, the contributions from Talib Zanna with 10 points and Lamar Patterson with 8 were not enough. The Panthers needed to strengthen their defense and handle the ball better. You simply cannot turn the ball over 11 times and beat the Gators.

I won’t get suicidal until Sunday’s games are played, but Saturday night was not good for me in the NCAA Tourny.

The day started well, with Louisville, San Diego State and Florida winning, but the Syracuse loss was a lance in my heart and attitude.  I have no horse left in the race that is the South Region, and I can no longer claim that all of my Final Four teams are still alive.  Villanova and Oregon were both losses for me, but I had them going no further than the next level.

The rest of my Final Four teams include Wichita State, Creighton and my choice for the 2014 National Championship, Virginia.  The other teams in action for me on Sunday are Arizona (Gonzaga) and Iowa State (North Carolina).

Day four. Our bracket has crashed into a remote island. There are few survivors. We are sustaining ourselves on coconuts and the tears of Syracuse fans. On the chance this message reaches civilization, tell my kids, “I love you, and North Carolina is overrated.”

Alas, destruction and doom…but nothing serious. The mighty Syracuse and Villanova have fallen far earlier than anyone thought, though the East and South will still see Florida and Michigan State in the Final Four, so the devastation is actually minimal, despite all of the red ink on the bracket.

Wisconsin and Wicita State are still on track to go to the Final Four in the West and Midwest, and Louisville and Baylor still have something to give before being taken out, so that, ugly upsets aside, this is still the winning bracket.

Okay, I have recovered from losing my champion, and can take solace that my Dayton Flyers are still making me look good in the NCAA Tournament.  If Mercer wins today, they will help my image too. SDSU made it to the 16 just like I hoped, as did Michigan.  Though my genius is stymied, my stupidly is lessened.  My only hope is that I receive some sort of NCAA  relief assistance.  Brian, I have rescue partied looking for you my friend.  Those Syracuse tears should sustain you for days.

Come to the GLV often to check back on our brackets and to read our team previews.  As a staff, we seem to have it together, and I am proud of most these picks.  I just wish I had listened and read a little closer.  Cheers for Sunday NCAA Fans!