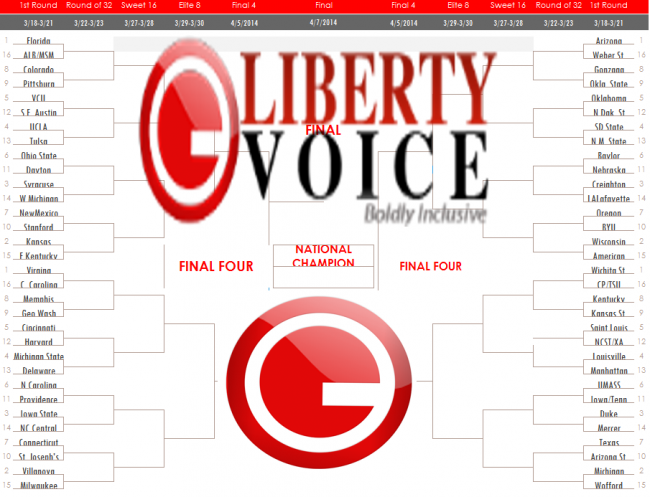 Alright boys and girls, it is our favorite time of the year here at the guardian Liberty Voice.  It is March Madness time!  Our sports section has spent hours arguing with each other about which team is going to walk away with it all this year.  Ultimately, we could not agree on a winner, so we decided on a little friendly competition.  Eveyone picked a bracket and a winner.  Now we want to share them with you!

Below you will find the brackets and summaries of 11 members of our sports team.  Check them out, see who you agree with, and support your favorite on twitter! (#MarchmadnessGLVChallenge)

The glorious American tradition we call March Madness is upon us. If you are anything like me, filling out the NCAA tournament bracket is a spectacular moment. However selections are made, either through research and strategy or blindly throwing darts, there is an opportunity to win the office pool or clean out one of Warren Buffet’s billion-dollar bank accounts with a perfect NCAA bracket.

This is where I intervene. My job is to make picks and the NCAA bracket you see is filled with guaranteed winners. I remove the tedious research from your busy day by drilling down on stats, schedules and roster updates myself. The answer to winning your NCAA bracket office pool is above so use my information as a resource or just copy an identical bracket and we can split the billion-dollar prize.

Michigan State! It is not a chalk pick but it feels like it they way they are playing. Their performance in the Big Ten tourney and Izzo’s history in March Madness sold me. Plus any team that embarrasses Michigan like that warms my heart. I picked Wichita State but could see Louisville beating them and going all the way to the finals. Florida and the Spartans are the two best teams at the moment, too bad they are on the same side of the bracket.

I will be upfront; I know as much about college basketball as I do about animal husbandry. That is to say, nothing at all. Since the odds of getting a perfect bracket range anywhere from 1 in 128 billion (and that’s usually only if you follow the sport) to 1 in 9.8 quintillion (that’s 1 followed by 18 zeroes) if you don’t, I went with an American classic. I flipped a coin. The higher ranked teams were “heads”, the lower ranked team were “tails”. I used a quarter from 1990, as a newer state quarter may have caused biases.

I chose Michigan State to win the NCAA National Championship because of the tremendous amount of momentum and confidence they are currently playing with, after their recent Big 10 Championship. They have shown that they are healthy and can compete with anybody, because of their highly talented squad.

My sleeper team is New Mexico, whom I predict will surprise most people and make it to the Elite 8.

To be honest, I am stunned by the rankings of both of my final’s opponents. Both of these teams should be number 2s at the very least, and my two finalists are going to show the committee that they aren’t as smart as they think they are. There has been some dark horse teams the last few years, but I don’t see this happening this Tournament. It was unfortunate that Wichita State was bracketed with Kentucky, Louisville, and Duke. This probably cost them a chance in the final four, as they were not going to get through all three.

Growing up in Big 10 country and living my adult life in North Carolina, I can never seem to take my fandom out of the equation when filling out the bracket for the Big Dance. I generally am pretty heavy on the chalk, and this year is no exception. I have No. 1 Wichita State making it all the way to the championship along with No. 2 seeds Wisconsin and Kansas. Now here is where my Big 10 roots muddy up my bracket. Along with Wisconsin, I have No. 4 Michigan State in the Final Four because I just cannot see Virginia beating a Tom Izzo coached team when it matters.

The March 21st battle between the Kansas Jayhawks and Eastern Kentucky Colonels is a much-anticipated one.  These two teams are equally ranked in the win – loss column with a record of 29 – 4. However, in the overall standings this is a clear mismatch. It is my personal belief that this will be a wipeout for The Eastern Kentucky Colonels. The truth is this team does not appear to have an answer for the Jayhawks star guard. The Kansas Jayhawks have a premier player in Andrew Wiggins, and expect a stellar performance from him. Wiggins averages 17.4 points per game and has a .449 field goal percentage. Plus, he has been known to go on a scoring rage and take over the game. All those factors must be taken into account by Jeff Neubauer, and the whole Colonels organization before Friday. It is imperative for them to figure out how to close out Wiggin’s clear lane to the basket, and force him off the perimeter. If they can disrupt his game there is a better chance for Glenn Cosey, Corey Walden, and Eric Stutz to put together a solid run.

I approach my NCAA basketball brackets in a different way from a lot of my friends.  I pick each individual game, one-by-one, and then I look at the two teams I have remaining and pick the better of the two.  It never fails to amaze me when I fill in the slot for “NCAA Champion.”

It is through this method that Virginia came out as my winner this year, handing the Wichita State Shockers their first loss of the season in the championship game.  Along the way I see the Cavaliers having a pretty easy path to the Final Four, having only to get past Coastal Carolina, George Washington, Cincinnati (Yes, the Bearcats will take down Michigan State) and Iowa State.  I am very nervous about Iowa State.  Syracuse will be their final hurdle before the showdown with the Shockers.  I like the Cavaliers’ defense and I like their balance.  Most of all, I like their energy and body language.  They are on a roll, and that is often the difference in post-season play.

There is so much parity across the NCAA landscape this season that I think there are going to be a number of first-round upsets. Coastal Carolina is my big Cinderella pick this year, and I see them taking down Virginia and running all the way to the Sweet 16. On the flip side of the bracket, I really like Louisville to emerge from the Midwest to matchup with the unbelievable Jabari Parker and Duke. My Final Four picks are Florida, Michigan State, Louisville, and Creighton. Creighton shoots well enough to beat anyone, but I think Louisville meets Florida in the finals. Florida, the No. 1 ranked team, is healthy and just too good this season, they take the National Championship.

Cinderella is clearly dressed for the party, but this year midnight will strike long before the ball is over. See why I am picking her to leave the ball early, and let the usual suspects battle for the crown in the late stages HERE.

My bracket is full of upsets, including of course my Cinderella Champion.  I also have last year’s surprise, Wichita State, getting upset by little ol’ Manhattan.  I do not believe that there is a real elite team in this year’s tournament, and the field is so wide open anybody could win.  If the Chanticleers are not the ones to pull it off, I think someone unexpected still will.  So sit back, and enjoy the competition, I know we will!

Make sure to follow the Guardian Liberty Voice’s entire coverage of the NCAA Tournament.  We have team bios, an updating schedule of all games, and previews and recaps galore.  See which teams we predicted days before Selection Sunday would wear Cinderella’s slipper, plus much more.  Check back after each major day of competition for an update on the brackets and how our team feels about them.