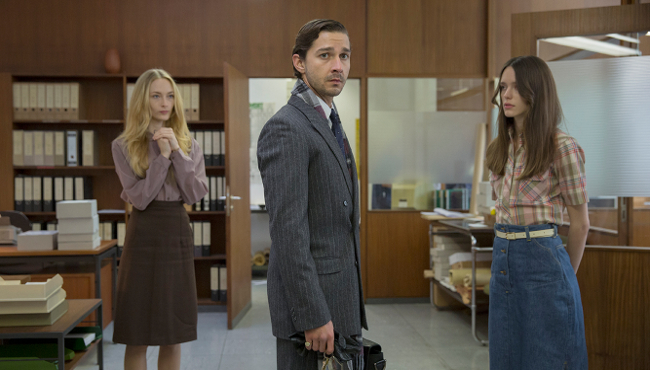 Manhattan’s Sunshine Cinema caused major controversy yesterday after they offered free tickets to Nymphomaniac screenings for babies. The sexually explicit drama film documents a woman’s hypersexuality condition from birth up to the age of 50, and has been rated NC-17 for scenes of strong sexual content and graphic nudity.

Owners of the Landmark movie theatre insisted the promotion was put in place to allow caregivers the opportunity to watch a film whilst their babies napped (the offer is only valid with a ticket-buying adult) although whether any child can sleep through the audio disturbance that is cinema surround sound remains to be seen.

The scheme is part of a regular Wednesday campaign dubbed “Rattle & Reel”, with Steve McQueen’s Oscar-winning Twelve Years A Slave having been used in a prior showing.

Nymphomaniac is headed by Danish director Lars von Trier, and features the household names of Shia LeBeouf, Willem Dafoe and Uma Thurman. von Trier himself is a man known for controversial film making and risqué subject matter, and is credited with the wave of arthouse mainstream films using unsimulated sex scenes after the inclusion of such images in his 1998 film The Idiots. He is currently banned from attending the Cannes Film Festival on account of comments made during a press conference in 2011, when he jokingly claimed to be a Nazi.

The film has so far split opinion, with some regarding it as an example of dressed up pornography and others declaring it an indulgent masterpiece. Nymphomaniac currently holds an 8.0 rating on aggregate approval website Metacritic, indicating generally favorable reviews (it is unclear whether any babies were offered the chance to review the film).

Despite a shocked response from moviegoers, Sunshine Cinema is refusing to cancel the promotion, stating that their policy is to offer all films to their customers “regardless of subject matter or rating”. They went on to reveal that the initiative has been one of their most successful customer service programs.

Experts maintain that a baby has the ability to understand the simplest of words after around 8 months, and associate certain actions with words only after 12 months, so taking a newborn to watch five and a half hours of adult content might not be as harmful to their innocence as many may think. However, despite what scientists might say, the vast majority of parents will find the thought of their child staring at a 70-foot cinema screen depicting what consenting grown-ups do behind closed doors a little too unethical to comprehend.

As far as theatre-related blunders go with this film, Sunshine Cinema’s poorly planned promotion ranks second, as gobsmacked audience members in Tampa were treated to the full 2-minute trailer before a showing of Disney’s PG-rated film Frozen, courtesy of a remarkably liberal projectionist.

Whilst marketing ploys like free popcorn and 2 for 1 tickets continue to be advertised in virtually every film theatre in the modern-day, it is widely speculated that the Lower East Side moviehouse who offered babies free Nymphomaniac screenings will have to wait a while before their innovative idea to effectively disregard parental guidelines catches on.