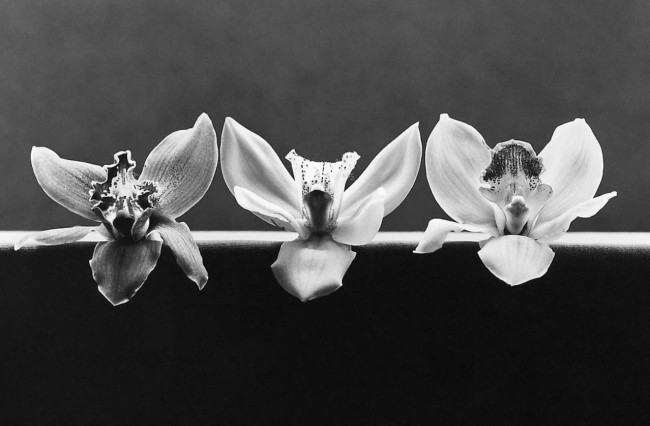 The Grand Palais in Paris presents one of the biggest retrospectives on the 20th century American art photographer, Robert Mapplethorpe from March 26 to July 13, 2014. The exhibit will display over 250 photographic images, spanning his career that began in the 1970s until his unfortunate death in 1989.

The retrospective opens with a powerful image of Robert Mapplethorpe taken near the end of his life. Self Portrait (1988) shows the photographer in black, with the impression that his head is detached, cloaking him in the darkness. Seated, he looks straight ahead, as if he were staring death down – challenging it. In his hand, he holds a skull-head cane to emphasize his confrontation with his demise.  Slightly blurred, the photograph implies that death is near, and he is slowly fading.

Like all of the photographic works in the retrospective, this self-portrait is implemented with unequivocal perfection. From the symmetry to the harmony of the image, it is Robert Mapplethorpe’s testament to his mastery.

According to exhibit organizers, the retrospective’s challenge was being able to show Robert Mapplethorpe as an exceptional classical artist, who tackled artistic techniques using photography as would a sculptor with clay or stone.

The Dada artist-sculptor, Marcel Duchamp, and the assemblage artist-sculptor, Joseph Cornell influenced Mapplethorpe. He experimented with mixed media, producing collages that incorporating print images. Then, he discovered the Polaroid camera, and used his own photographs for images because “it was more honest.” He told Bomb magazine in 1988, that he fostered his style by working with “instant playback.”

The artist soon realized that his Polaroid images were formidable enough. By 1973, Mapplethorpe had his first solo exhibit in New York City. He had found his niche, and two years later, the photographer moved on to a Hasselblad medium-format camera.

In the late 1980s, the photographer focused on portraits, sculptural nudes and work portraying sadomasochism. His work also touched on women and femininity, specifically Patti Smith and Lisa Lyon.

Mapplethorpe took photographs of his inner circle, which encompassed everything from artists and socialites to pornographic film stars and S & M underground members. His work at this time also included 1975 and 1979 cover art for American singer-songwriter, Patti Smith and photographic work for Interview magazine. 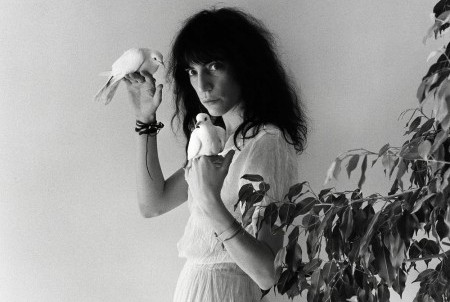 The photographer began documenting the S & M scene in New York, though shocking to many, technically, they were an execution in mastery.  In late 1988, when asked about the S & M work, Mapplethorpe told ARTnews that he was not looking to shock, but “looking for the unexpected.”

His work continued to flourish, and his ability to skillfully capture the body in the medium continued to blossom. Mapplethorpe concurrently abided “classical aesthetic standards” and tested them. Working in various formats and techniques, he created still lifes, studio portraits and stylized nude compositions.

Portraiture was a frequent thread in Mapplethorpe’s career. He worked with bodybuilder, Lisa Lyons to produce Lady: Lisa Lyons, and spent time with New York’s cultural scene. Mapplethorpe’s portraits are absent of flaws, and express his continual quest of beauty. He had once acknowledged that he “sought perfection in form.” For him, the subject matter was irrelevant as he looked for flawlessness in nudes, portraits, still lifes and architecture.

In his artwork, the model is sculptural, indicative of classical sculptures, and directed by the conventions of balance and geometry. In his 1986 Black Book, he focuses on the section of a body – torso, arm or thigh. Mapplethorpe commented that he looks for the perfect fragment of a model’s body, and the result revealed a sense of strength and physicality.

Throughout the years, connections have been made between Robert Mapplethorpe and his figurative works and still lifes with the old masters, and the Renaissance period. A paradigm was seen at the Galleria dell’Accademia in Florence, when his photographs were displayed next to Michelangelo’s David.

The English writer Bruce Chatwin, once stated that Mapplethorpe’s “eye for a body was that of a classical sculptor in search of an ideal.” If Mapplethorpe had lived two or three-hundred years ago, he could have been a sculptor. For him, photography was the means to see, to create a sculpture. Robert Mapplethorpe never saw himself as a photographer, but as a “creator of images” in search of the Adonis.