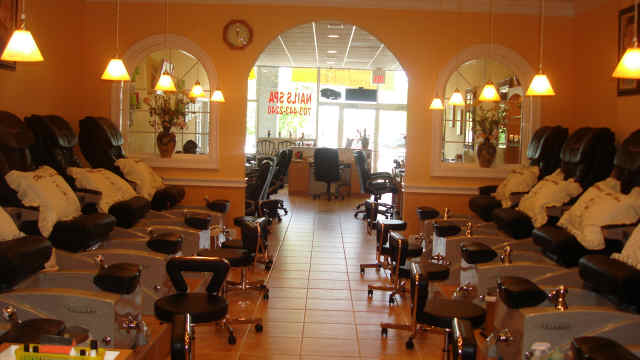 Stay classy, New Jersey! A woman has had a baby in a nail salon after deciding she would pop into the beauty parlor for a nice mani-pedi and foot massage even though she knew she was in labor already. Some might say an incident such as this could only happen in a place such as New Jersey, but this woman would not be the first person to give birth in an unusual place. Many woman have given birth in cars, but when that has happened, it is usually because they ran out of time while trying to make it to the hospital. In the case of 35 year old Anna Rubinstein, though, it was an  altogether different situation.

Rubinstein decided that because her first child had taken its sweet time to arrive–over 40 hours of labor, in fact; that she would have all the time in the world to spend a day of beauty pampering herself although she was in full labor. It is unknown why she thought she would have as much time with her second child as with her first because a second baby coming much faster than a first baby is not unusual in the least.

However, that was of no concern to Rubinstein, who helped New Jersey stay classy by giving birth to her second baby right inside the nail salon as she sat in the pedicure chair and then made her way to the salon’s bathroom to complete the process. She later told reporters that she thinks having her feet massaged is what prompted the baby to come before going to the hospital because she had heard an old wives’ tale about acupressure points in the feet causing a baby to be born. Of course, there is no scientific basis for this theory, but then again, science doesn’t seem high on the list of priorities for anyone involved in this situation. Salon employees had wanted to call an ambulance, but Rubinstein refused, saying she had “plenty of time” before the baby would make his debut even though her water had already broken as she was getting her tootsies into ship shape.

Her husband had been called and managed to arrive on time to assist in the delivery. Miraculously, the entire family got through the ordeal and the newborn infant was born without incident. After the baby arrived, the family went to the hospital to get checked out and ensure a completely clean bill of health.

Not surprisingly, reactions under the story on other news outlets have been less than enthusiastic, with commenters calling Rubinstein “selfish,” and “stupid,” and implying that she is a “redneck.” To her credit, she did apologize to the shop and stated that she hopes they will once again accept her patronage even though she helped New Jersey stay classy by having her baby inside of a nail salon. The salon has responded by saying that perhaps they will start giving foot massages to pregnant women who want a quick labor. Although they may do so, one anecdotal story about a woman who gave birth during a foot massage is not related to any realistic form of medical treatment. Otherwise, doctors would begin giving pedicures instead of medicine to induce labor.