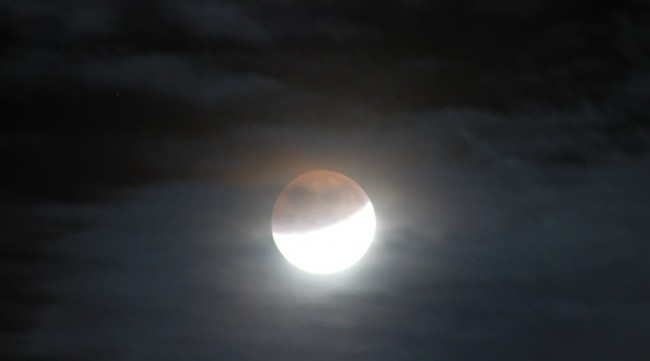 People in North America have not been able to view a total eclipse of the Moon since back in 2011, but that is coming to an end. On April 15, 2014, when the full Moon passes through the inner dark region of Earth’s shadow, there will be a full eclipse viewable.  It will also be able to be seen from most of the Pacific and South America. However in the eastern part of Australia the Moon will not rise until the eclipse is already in progress.

A full lunar eclipse has five different stages, all with diverse things to look for.

Next comes the more vivid partial eclipse when the Moon has entered into most of the Earth’s shadow and now no direct sunlight is able to hit the lunar surface. As more Moon moves into the shadow, it seems as if another nightfall has happened that is even darker. There are many more stars to be seen and of the Moon itself, there will only be a shiny sliver left that has yet to enter the shadow of Earth. The rest of the Moon will be presenting a strange looking red glimmering.

From this the Moon slips into what watchers have been waiting for, a total eclipse. Anyone who is watching the total eclipse will see now the moon is most likely not black but weakly lit by either an odd red or orange fiery glow. One may wonder why that is. The Earth’s atmosphere bends and retracts sunlight which hits the edge, so the fiery looking light is coming from every single sunrise and sunset that is happing around the Earth at that time. There haves been very rare times when the Moon has turned black. A few others, it has looked the color of a shiny new penny. It might even appear brownish or become so red it is the color of dried blood but these do not happen often.

There seem to be two major influences that affect the color of an eclipse’s brightness and color. The first is basically just how deep the Moon enters the Earth’s shadow. The center of the shadow is much darker than its outside edge. The second is what the state is of the Earth’s atmosphere at the time of the eclipse. If the air is clear, then the eclipse will be bright but if it is more cloudy or polluted, then the eclipse will look gray or black. It is unknown what the sky will be like on April 15, 2014 so what color the Moon will be that night will not be known until that time.

The totality of the eclipse starts to end once the Moon begins to come back into the main sunlight, and a partial eclipse begins again but only in an opposite order.

When the entire Moon has left the shadow of the Earth, only the penumbral eclipse part is left. It is the final part, the last bit just like in the beginning. This little bit of duskiness gradually fades and will leave the full Moon looking as beautiful and brilliant as ever. Out of the three lunar eclipses that happened back in 2013, two of them were penumbra eclipses only.

If anyone happens to experience bad weather on April 15, 2014, in North America, there will not much of a wait until the next total lunar eclipse. In fact it will occur on October 8, 2014 for the entire continent as well. In fact, April’s eclipse is just the first of four successive total lunar eclipses that are scheduled to happen in 2014 and 2015. Four events so close in a row are not common occurrences. This will not happen again until 2032.

People that live in North America will be able to view a total eclipse of the Moon on April 15, 2014.