Whale Fossil May be First Example of Echolocation 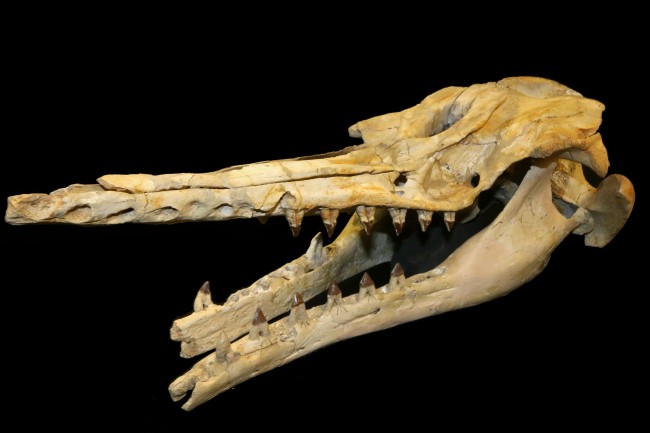 Whale fossil may be first example of echolocation according to researchers from the New York Institute of Technology. The skull of a whale like creature named Cotylocara macei found in South Carolina features pockets and a slight asymmetry that suggest the ability to create sustained high frequency sounds similar to those used by whales and dolphins today. Known as odontocetes, toothed whales have used echolocation for thousands of years, but there is strong evidence that this is the first creature to do so.

The ancient whale fossil was found in a bed that dates back to the Oligocene time period, during which the once dominant tropical ecosystem was changing closer to the climate we know today, some 30 million years ago. The skull sat in a private collection for about a decade before it was seen by palaeontologist Jonathan Geisler, who immediately knew the skull had special properties. The downturned snout and empty cavities at the base of the snout and top of the skull are the strongest pieces of evidence that Cotylocara used echolocation. These pockets likely contained the air needed to create the sound or were used to direct the waves where the creature wished to gather more information about its surroundings.

Despite the strong evidence that the whale fossil may be the first example of echolocation, there is some concern that the ancient creature may not have had the required ear bones to pick up the returning echoes. Whales today feature highly complex systems within their ears that allow them move quickly in the water, rolling and diving, without getting motion sick, at the same time providing them with the sonic sensitivity needed to track incoming echoes. In the case of Cotylocara however, this may be chalked up to the bones simply being lost or destroyed. Small bones such as those found inside the inner ear are notoriously fragile, and because this is the only known skull of Cotylocara, not to mention the best preserved, it will be very difficult to answer the question of whether or not it was able to use echolocation for hunting without finding another sample.

But even if the ancient whale was unable to use the ability, having these features in its skull has pointed scientists towards a path that may allow them a clearer picture of odontocete evolution. It was once thought that echolocation had evolved in one creature, and then the trait was passed down to its offspring. But Cotylocara macei may put that theory to the test once research begins on other whale fossils. With a clearer picture of what to look for, other fossils can be examined to get a clearer picture of how echolocation started, and how it was used by ancient sea-dwellers.

Because this whale fossil may be the first example of echolocation, the hunt is on for fossils from similar times that feature either the skull cavities suspected to be used to create high frequency sounds or the specialized ear bones that would allow them to pick up the echoes in order to find the answers of echolocation evolution.