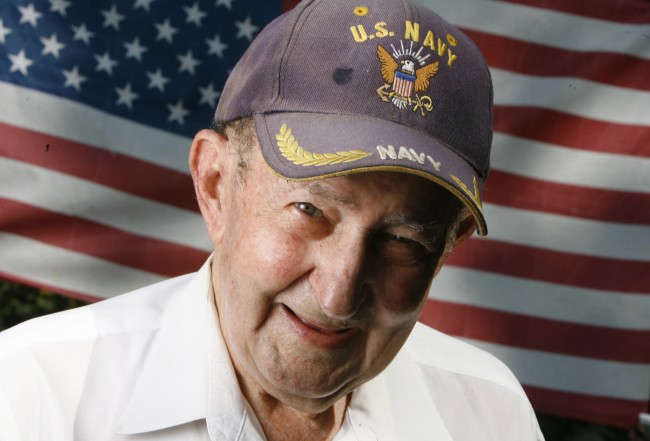 The World War II veteran in the iconic kissing photo in Times Square that became famous for representing the end of the war has died. Glenn Edward McDuffie died March 9 at a nursing home in Texas.

McDuffie became well-known after claiming multiple times that he was the man in the World War II-era photo in which a sailor impulsively kisses a woman in the middle of Times Square. The photo was taken August 14, 1945 by Alfred Eisenstaedt, a Life magazine photographer. Born in North Carolina, McDuffie moved to Houston in 1960 where he became a mail carrier and played baseball semi-professionally.

Six years ago, McDuffie got his chance at approval after Houston forensic scientist Lois Gibson concluded that he was indeed the man in the World War II picture, a claim he had made for decades. The news came 62 years after the photo was taken, on McDuffie’s 80th birthday. McDuffie was not the only man who made claims to be the sailor in the photograph.

“It’s a big relief,” he told the Houston Chronicle in 2007. “I thought I’d die before anyone believed me,” going on to say that he agreed to polygraph tests, and remarking that it was a bit disheartening to see the number of people who falsely claimed to be in the picture.

World War II vet Gibson had McDuffie pose with a pillow in the same position as the iconic photo, and photographed him over 100 times. Gibson was able to compare the facial features of the then 80-year-old man to his younger, photographed self to prove a match. “I was absolutely positive,” Gibson, who is a respected forensic scientist that appears in the Guinness Book of World Records, said of the match. Life magazine had been unable to confirm the match, as Eisenstaedt had passed away years earlier and had never kept a record of who he photographed.

When the news of his identity broke, McDuffie appeared in newspapers, magazines, and news shows like Good Morning America. He was invited to make appearances at air shows, fundraisers and parties, where women would pay for a picture and a kiss on the cheek. “He had the most glamorous life of any 80-year-old,” said Gibson.

Once McDuffie had proved to be the sailor in the photograph, he was able to shed some light on the World War II photo. McDuffie says he was in New York, changing subway trains on his way to Brooklyn when someone told him of the news of Japan had surrendered in the war. It was that moment that McDuffie realized his older brother, who was being held at a prisoner of war camp, would soon be released. He was so happy that he “ran out into the street.”

McDuffie was “hollering with a big smile on my face,” and ran up to a nurse who was looking at him. The rest is photographic history. “I just went right to her and kissed her. We never spoke a word,” he said. McDuffie described the streets of New York as alive with euphoria.

The World War II veteran from the iconic photo died of a heart attack that he had early in the day, according to his daughter, Glenda Bell. Glenn Edward McDuffie is survived by his daughter and two grandchildren.