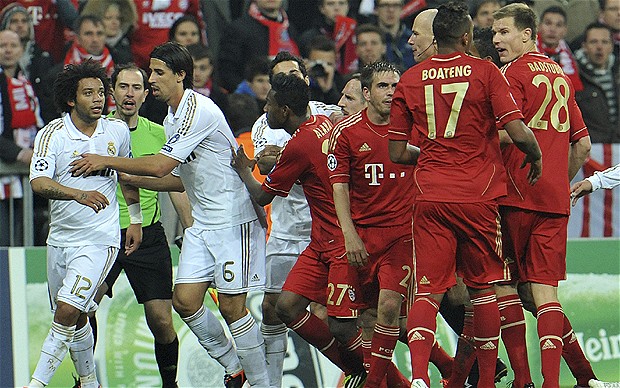 Well, it is that time of year again. A time when the sun begins to shine a bit longer and the flowers begin to bloom. It is also a time when soccer fans from around the globe come together in harmony to cheer or jeer the winners and losers of the 2014 Champions League Semi-finals; a time when friends become quick enemies, as some come to gloat about victory in the faces of others suffering the bitter feeling of defeat. In this year’s Champions League Semi-finals, the matchup between Bayern Munich and Real Madrid brings a long list of interesting storylines, none of which will disappoint.

In the first leg of their semi-final matchup, current coach of Bayern Munich and former coach of Barcelona, Pep Guardiola, was greeted with a warm welcome of boos as he stepped foot in the Estadio Bernabeu. Pep, who had never previously lost as a coach at the Bernabeu, was also greeted with some major criticism after Real Madrid won by a score of one-nil. Bayern Munich held possession nearly three-quarters of the time in the first leg, but failed to get that many quality scoring chances. Critics of Guardiola are quoted as calling Bayern’s tactics “predictable” and “slow” and if Bayern fails to make it to a third consecutive Champions League Final, fans of the club may fall quickly out of love with the once beloved tactician.

Now being down 1-0 after the first match and failing to score a road goal, in the second leg of this semi-final, Bayern now has to win by a margin of two goals in order to move on to the final. The one-goal margin, however, is one that can be overcome by Bayern. The club goes back home to play the second match in Munich, where Bayern has only lost two games this season. The big question coming into the second leg of this semi-final is how will Guardiola adjust to the tactics of wait and counter-attack brought forth by Real Madrid?

Still, there are many more questions that will need to be answered by Guardiola in the second half of this semi-final matchup. Questions like: will he gamble again with moving Captain Philipp Lahm from his original full-back position? Will he wait “too long” this time around to bring in counter-attack specialist, Javi Martinez? How quickly will the hook be pulled on Ribery if he fails to show up and play again? All questions of strategy aside, the second leg of this semi-final will have some major historical implications for both of these coaches and their storied clubs should they make it to – and win – the League Final.

For example, if Bayern Munich can pull off the two-goal margin of victory in this second leg, Bayern will have the chance to be the first repeat champions since the 1990 AC Milan club. Real Madrid coach, Carlo Ancelotti, will do everything in his power to prevent that from happening, as he was a player on that repeat AC Milan squad. Bayern will also be looking for its sixth league championship, but for Coach Pep Guardiola, he has a personal-and historical- best on his mind. After Pep just lost his first-ever match as coach at the Estadio Bernabeu, if he can lead Bayern to a two-goal winning margin and make it to the finals, he would have the chance to win a tournament best, three titles (and his first with Bayern Munich)-eclipsing the record set by coaching great Sir Alex Ferguson.

However, Pep will not be the only coach attempting to win a record third tournament title. Real Madrid coach, Carlo Ancelotti, will also be looking to win his third league title and his first with Real Madrid. Real Madrid currently holds the title with nine UEFA Championships won, but if Ancelotti can get his club to hold on to this one-goal lead, they would have the opportunity to extend that record to ten (its third since the Champions League era began in 1992-93).

With so much riding on the chance to move on to the finals and make history, stakes are high and hopes for fans of each squad are even higher coming in to this next match. The personal bests that could be set by each coach- should they win a final- are enough to have fans at the edge of their seats during the second leg of this semi-final. But if anyone was to ask coaches Ancelotti or Guardiola what is more important to them- setting their personal and historical bests or the opportunity for their team to make history- their answers would undoubtedly be the latter. However, the two are linked no matter what, and this next game will pin potential legendary coach against legendary coach and storied team against storied team.

Bayern Munich vs Real Madrid: Their Storied Pasts to Legendary Futures added by Ryne Vyles on April 25, 2014
View all posts by Ryne Vyles →