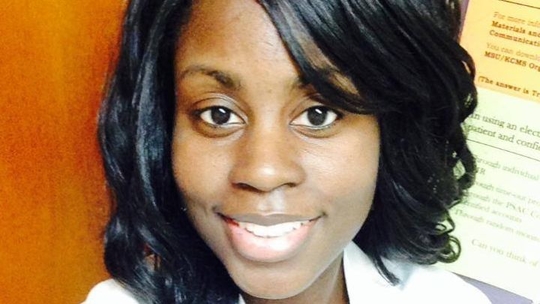 Sunday morning a fisherman spotted a body in Lake Charles in Porter, Indiana. Scuba divers retrieved the body of a female dressed in dark clothing. Though Indiana State Police are doing a full investigation and it has not yet been confirmed, it is believed to be the body of the missing doctor from Kalamazoo, Teleka Patrick, who disappeared four months ago.

The Kalamazoo doctor, Teleka Patrick, has been missing since Dec. 5, 2013. She had been working on her residency in psychiatry at the Western Michigan University School of Medicine. Following a shift at the Borgess Medical Center, the 30-year-old got a ride from a co-worker to a nearby hotel. Unable to get a room for the night, she took a shuttle ride back to her Lexus in the medical center’s lot. Witnesses say she left the lot on her car at eight pm that night, but by 10 pm, the missing doctor was seen driving erratically and then her car was found abandoned.

Though the car reportedly had a flat tire, her wallet with her identification and credit cards were left in the car. One theory has been that Patrick suffered a stress-related breakdown and was heading to Chicago to visit family members. But she never made it there and her whereabouts have been a mystery.

The body found earlier today was in the same area as Patrick’s abandoned car. The area had been thoroughly search in January when the lake was covered in ice, and again last week, but they found no signs of her.

More than a dozen search warrants were issued and her phone records were examined, along with her social media, but they have not helped find the missing doctor. At one point, her phone records led police to her boyfriend, James A. Davis, who was the last person she texted. In February, he explained in an interview that she was concerned during their last phone conversation and was “scared for her life,” though he thought she was just being paranoid. David believes that she tried to book a hotel room because she was scared to go home that night.

To complicate matters, Davis said that she was afraid of gospel singer, Marvin Sapp. Sapp reportedly initiated a restraining order against her and threatened her. He reported that she visited him at home and communicated with his children, claiming that he was her husband. Her posts on Twitter confirm an obsession with the singer. Carlin continues to be suspicious of Sapp, but the Kalamazoo police believe he is just a victim of stalking.

Unfortunately, the mystery of the missing doctor may finally be solved. An investigator hired by her family, Jim Carlin, believes the body they found is her. He said that several factor lead him to believe it is her. At this time, the Kalamazoo County sheriff’s department has confirmed that a body was found, but they have no identified the identity of the person. Meanwhile, the family has decline to comment, except that they need their privacy respected and continued prayers. They await confirmation from an autopsy to be done later this week.