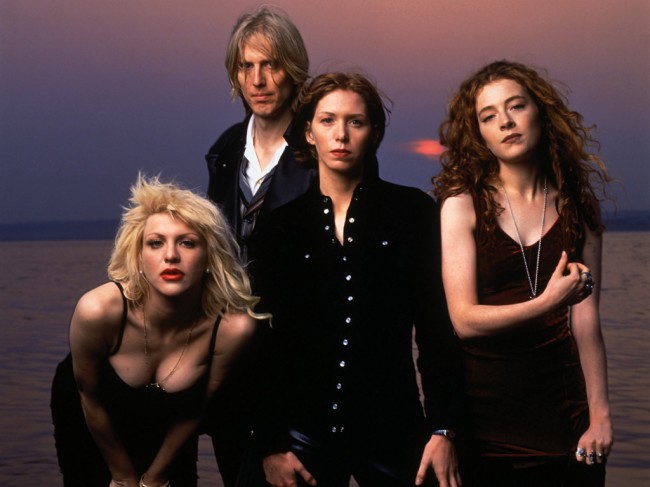 News was released late last night the Courtney Love is reuniting the Celebrity Skin lineup of her mid-90’s band Hole. The group intends to release a new single in May, Wedding Day, to help promote their U.K. tour, according to The Quietus.

This particular and popular lineup played together from 1994 to 1998. Celebrity Skin was the band’s first studio release featuring bassist Melissa Auf Der Maur, who replaced the band’s former bassist Kristin Pfaff after her drug overdose in 1994. The album was a group asserted effort to depart from their iconic grunge sound and divulge into a more power pop sound. Although Schemel is accredited for playing drums on the album, the producer Michael Beinhorn suggested a session drummer fill in for her on the recordings. The issue caused an immediate riff between Beinhorn and Schemel, and she left the band in 1998, dropping out of the tour. Celebrity Skin was the original band’s last album before the disbanded in 2002.

In late 2013, Love posted a photo on Facebook of her and Hole guitarist Eric Erlandson in an embrace, tagging Auf der Maur. The post read: “2014 is going to be a very interesting year.”

It has not yet been established if the reunion is happening to collaborate on new material or to tour or both, but Love told The Quietus that her and Auf der Maur have been rehearsing new material. She also mentioned that the lineup got together “just to see how it was,” and they have since played together repeatedly throughout the last week. It is unclear whether Wedding Day is a song the band has developed since the reunion or if it is a rehashing of old material.

After Schemel’s departure in 1998, the band rejoined for the first time in 2012 at the premiere of Hit So Hard, which is a documentary reliving the drummer’s story about fame, addiction, and being an openly gay drummer in a rock band. At an after party, the Celebrity Skin lineup played Miss World, Live Through This, and a Wipers’ cover Over the Edge. It was the first time they were together on stage in 15 years. At the time, band members eschewed rumors of them getting back together, however they did claim they were open to the idea.

Despite the band’s reunion, Love continues to find ways to make the headlines. Recently, she has been on trial for Twitter libel (Twibel), a case which she won, she was also recently sued by a psychiatrist for $50,000 for a breach of contract, and she continues to make alarming and awkward statements on social media regarding the whereabouts of Malaysia flight 370 and Daniel Tosh’s privates.

In regards to Cobain, Love has said the it is “very likely” that she will give the nod for a musical based in the life of her deceased husband, as long as it is done in good taste. Also, she has released online photos from an apartment her and Cobain shared.

The original Celebrity Skin lineup of Hole with frontwoman Love may be a step in the right direction for the future of the band, or it just may be the perfect time for some old friends to get together and play a couple of tunes. With May a whole month away, it is too soon to tell, but Hole fans are eager to find out.