By Faye Barton on April 29, 2014Comments Off on Dungeons and Dragons 5th Edition 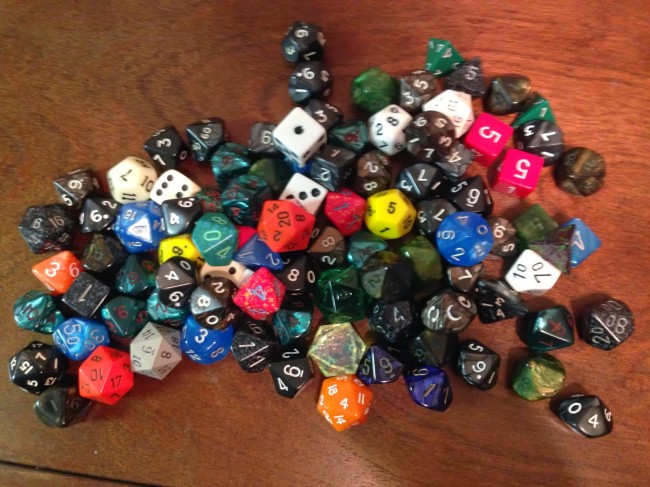 The connotation that Dave Arneson and Gary Gygax’s legendary table-top Role Playing Game (RPG) has held throughout its long history has changed drastically since its inchoation in 1974. Dungeons and Dragons has gone from a past-time that only the nerdiest, basement-dwelling homebodies would undertake, to a hip and relevant activity. Dungeons and Dragons  has been featured on hit sit-comedy shows from NBC and CBS; both Community and The Big Bang Theory famously included the iconic geeky game in episodes that showed the characters socializing through the game.

Unlike its graphics-based competitors, Dungeons and Dragons relies on the capability of the players to effectively imagine the scenarios in which they find themselves. The game is played with pencil, paper, a set of tetrahedral dice, and the wrinkly, organic processor lodged within the player’s skull. More complicated play sets often involve figurines and plastic scenery components. Avid players refer to it as “the ultimate sandbox game.” The term “sandbox” meaning that the parameters allow the player to roam freely throughout the world, doing as he or she pleases. A video game may not allow a player to travel past a certain location on a map, whereas players in a Dungeons and Dragons campaign can go anywhere and do just about anything that they wish as long as it corresponds with the plan of their DM (Dungeon Master.) Each gaming experience is unique and dependent upon the player’s relationship with the other players at the table.

Staple elements of numerous prominent video games were pioneered by Dungeons and Dragons, including cooperative play, avatars, open-ended stories, character level systems, and the “dungeon dive” paradigm in which the players “run through a dungeon and kill monsters.” New and more sophisticated gaming consoles and graphics of astounding detail have made rough competition for the imagination-based game.

The fourth edition of Dungeons and Dragons famously flopped; almost universally upsetting veteran players and pandering to new gamers who wished for a simpler system. Wizards of the Coast has said that they wish to unite fans of all editions while making the game accessible to would-be players who are still unfamiliar with the franchise and attempting to draw the interest of video-gamers; a likely daunting task. Wizards of the Coast hosted free playtests of the game in its beta-stages on their website until December 15, 2013; fastidiously taking in commentary from testers.

Unlike previous editions of the game, the fifth edition of the D&D franchise does not use a numbered title and is simply called Dungeons and Dragons Next. Wizards of the Coast appears to have high hopes for Dungeons and Dragons Next; the company does not release profit statistics, but the table-top RPG game industry has been suffering from the growing popularity of electronic games that follow a similar premise. Since Dungeons and Dragons Online was released and made free to play in 2006, it has accumulated an additional 1 million players; a number that pales in comparison when looking at the 7.8 million subscribers who pay to play World of Warcraft as of February 2014.

Wizards of the Coast has not yet announced a specific official release date for the fifth edition of Dungeons and Dragons, and only says that it will be available sometime during the summer of 2014. According to an article posted on Examiner.com, Barnes and Noble may have leaked a release date that has not been verified as factual by Wizards of the Coast. The bookstore’s website ostensibly said, on a page that has since been removed, that the game’s Player’s Handbook would be available for purchase on August 19, 2014 and retail for $49.95.