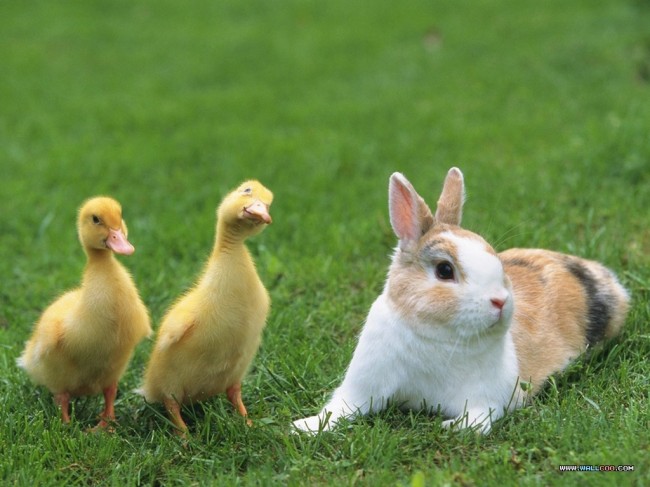 Animal advocates have a warning for people this Easter: do not buy bunnies, chicks, and ducks as pets, unless you are ready and willing to make a long-term commitment. This year, Easter is on April 20.

It has been apparent in past years that right around the Spring holiday, children are given the baby animals as gifts. However, it has been seen year after year that the excitement over the animals quickly wears off, and all they are left with is the burden of having to care for a living creature. Although bunnies, baby chicks and ducklings are cute at Easter they are huge responsibilities.

Amy Mott, President of Clover Patch Sanctuary, a rescue organization for rabbits and guinea pigs in Tennessee, said that getting a rabbit as an Easter gift is the worst thing a parent could do.

“If you are not prepared for the responsibility or are aware of what it takes to care for a bunny, then you will ruin the animal’s life. Just do not do it,” Mott has said. More than half the bunnies at the organization are impulse buys leftover from past Easters. There are some that have been in the Clover Patch Sanctuary for nearly four years.

Rabbits have a medium-length life expectancy of over 10 years. To own a rabbit, owners need to proof their homes, or wherever the rabbit’s inside cage is being kept, as bunnies are known to chew. They require a special diet of grass hay, rabbit pellets and plenty of vegetables. It is also recommended they are given something to chew on. If a pet bunny is not given anything, they will find whatever is laying around. The rabbit also requires annual veterinarian visits, plenty of room to play and exercise, and a lot of social time with the owner.

Baby chicks require constant care and monitoring. They also grow very quickly, so it is recommended that there is an adequate living space. The younger they are, the more care and monitoring they need. They require heated lamps from a young age and exposing baby chicks to too much or too little heat can result in death. They are also messy, scratching bedding or the yard in which they are kept. Like rabbits, baby chicks also require a special diet. They need to eat a certain kind of feed that has been sprinkled with grit.

Ducklings have a life expectancy of over 10 years, in some cases living up to 15 years. They are social animals, so it is recommended that if someone were to want to raise a duckling, they should consider getting two. They are also really messy and a threat in spreading salmonella. Ducklings need plenty of space to move and roam around and also require a special diet.

If parents are still considering buying a bunny, chick or duckling for Easter for their children, then they need to be aware of the possibility their child will tire of caring for the animal, and then they will be stuck with the burden. Animal activists suggest getting a stuffed animal toy instead. That way, a living creature is not forgotten about.