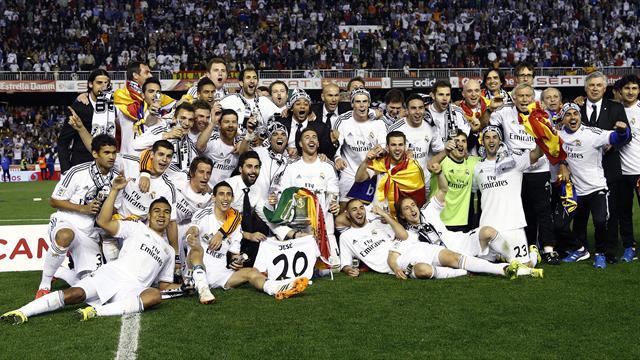 Wednesday witnessed the clash of two Spanish titans in a struggle to clinch to the prominent Copa del Rey title. The match between arch-rivals, Real Madrid and FC Barcelona was indeed a challenge to behold. The El Clasico game saw Madrid win without the famous classical player, Cristiano Ronaldo who was obviously off the pitch from start to finish due to injury.

The Portuguese star had been out of action for a couple of games including the second leg of the Champions League quarterfinal match against Borussia Dortmund that almost led to their exist. This disappointing development comes as a result of a muscular injury acquired by the los Blancos forward during the first leg encounter.

Earlier before, there have been speculations concerning the fate of the soccer player’s medical state of readiness ahead of Wednesday’s clash. It was unclear if he would be fit for the King’s Cup final. Not until its official declaration on Wednesday morning, fans still hoped the Portuguese forward would be present. When the news final arrived, it sounded like a bombshell. It stimulated worries for the Spanish capital club whose skipper will be unavoidably absent.

While some are pessimistic that his absence might be detrimental to the club, others like the Madrid Boss, Carlo Ancelotti were optimistic of a fruitful game with or without the classical player. He recounted that the absence of the club’s No. 7 would be definitely felt, but it will neither weigh down the players’ enthusiasm nor hinder them from achieving their purpose in anyway.

Ronaldo has indeed displayed remarkable efforts in lifting the club to attaining its present status this season. As the highest goal scorer in the league he has been instrumental in helping the club gain 79 points, thereby placing them 3 points behind Atletico Madrid who are currently No. 1 on the table. The striker leads the La Liga scoring line as the highest goal scorer with 28 goals so far this season. His nonappearance in their last Champions’ League game was obviously felt, seeing to the fact that they managed to escape by the whiskers. This postulates that Madrid will find it difficult to win El Clasico with the absence of classical Cristiano.

Wednesday’s game between Madrid and FC Barcelona appeared like a rematch of the 2011 Copa del Rey final, in which Ronaldo’s late header sealed the saga in the same Mestalla stadium. Madrid scored the opening goal in the first half, thanks to Angel Di Maria’s judicious conversion of a counter attack in the 11th minute. FC Barcelona’s lone goal came from Marc Bartra’s 67th header. Gareth Bale, who fully in charge of Cristiano’s flank, scored the remarkable winning goal, his first in three El Clasico matches.

Indeed, Ancelotti’s prediction that the absence of classical Cristiano from Wednesday’s El Clasico will in nowise hamper Madrid’s focus to win proved to be correct. Though the Blaugrana side led the game with possession as usual, steadiness in focus and resolution gave Los Galácticos the deserved victory. Unlike the Els Culers team, FC Barcelona is most likely to end this season without a trophy.

FC Barcelona Loses to Madrid in El Clasico Without Classical Cristiano added by Obed Uche on April 17, 2014
View all posts by Obed Uche →