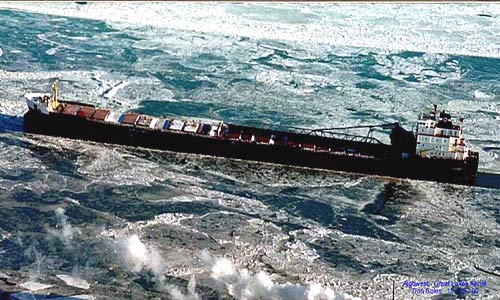 Iron ore shortages caused by leftover winter ice  on the Great Lakes is a common occurrence for the American steel industry when ice jams close down the lakes to commercial shipping each year. This year, leftover winter ice jams have overstayed their welcome into early spring. Yesterday, two “ore boats,” sister ships Arthur M. Anderson and Cason J. Callaway, finally arrived at the Gary, Indiana dockyards, 15 days after departing from Duluth, Minnesota, on a trip which usually takes three days.

Together, the two ships will deliver  an additional 50,600 tons of much-needed iron ore pellets to the now-idle U.S. Steel furnaces in Gary Indiana, which have been shut down for more than a week due to iron ore shortages. The 1100 mile journey has taken the two 767 foot-long vessels from Duluth, across ice-choked Lake Superior, down the St. Marys River, the famous Soo Locks on the American side of the waterway, and into Lake Huron before continuing on to Lake Michigan and then down the entire length of Lake Michigan to their final destination.

As big as they are, the Anderson and the Callaway are far from being the biggest ships on the Great Lakes. There are 14 1,000 foot-long ore carriers on the Lakes, but they are still waiting for the ice to break up before attempting the trip. The only way the Anderson and the Callaway were able to make the trip at all was by following two United States Coast Guard ice breakers that carved a path through the ice for the ore carriers. The ice breakers are part of a fleet of 11 heavy-duty Coast Guard cutters stationed in the Great Lakes mostly for this purpose.

The steel furnaces will be fired up again as soon as the iron ore is offloaded, but they may not be fired up for very long because, although this shipment will alleviate iron ore shortages, the early spring ice jams have also stymied coal carriers on the Great Lakes, preventing them from delivering their cargoes. Two things are needed to make steel, iron and coal. No coal, no steel, and coal levels are 70 percent below usual levels.

More than 92 percent of the Great Lakes were frozen over this year, making it the second worst year on record for ice jams on the inland waterways. Record cold temperatures across the Upper Great Lakes have left slow-melting ice jams two to three feet thick, with walls of ice up to 14 feet high formed by a combination of wave action and wind. High winds blowing across the ice jams can often move the jams up to four miles a day….in the opposite direction from the route the ships want to take, carrying the ice locked ships along with the ice backward.

The captain of the first ore boat to come through the Soo Locks this year, Cason J. Callaway skipper Michael Merrick, has been sailing the Great Lakes for nearly 40 years. He thinks these have been the worst conditions he has seen…and he is right. According to historical records, the last time the Great Lakes were shut down this long was back in 1979, another banner year for blizzards and cold temperatures.

As the Mississippi River is to cotton and crops, the Great Lakes are to coal and steel. Without the Mississippi, the cotton plantations of the South would not have been able to get their cotton bales to market. Without the network of lakes, rivers and canals connecting the Upper Great Lakes iron and coal mines to the blast furnaces of the steel industry, the American economic miracle of the 1860’s to the 1920’s might never have taken place.

The seasonal constraints on the much beleaguered American steel industry continue to hamstring U.S. competitiveness in the global battle for control over the steel industry. The United States currently ranks fourth in steel production, behind China, the European Union, and Japan. China’s steel production has increased by 58 percent from 2007 to 2013, increasing from 495 million metric tons of finished steel to 779 million tons in 2013. Total world production of steel for 2013 was 1,607 million tons, putting the Chinese production at 48.5 percent of total global production. China produced 900 million metric tons of its own iron ore in 2o13, but still imported an additional 820 million tons of ore from other countries.

Since the American steel industry is still headquartered in the Midwestern “rust belt,” and the rust belt remains susceptible to seasonal fluctuations resulting from adverse weather conditions, American steel producers will continue to labor under a competitive disadvantage against China, the E.U. and Japan, where seasonal fluctuations in steel production are not part of the equation.

Steel industry analysts have been pointing out for years how the seasonal conditions in the United States affect our competitive position in the steel space but, short of a change in the weather, it seem unlikely anything short of an embargo against foreign steel will give American steel makers some breathing room. Climate change may increase future seasonal fluctuations in steel production, and steel production is, itself, inevitably unfriendly to the environment, compounding the problem.

American steel makers have found niches in specialty products, high tensile strength steel, and exotic steel blends for military and scientific applications, but the steel industry requires massive markets and large-scale production of standardized products to establish a viable base,. Specialty products have not generated enough sales, however, to iron out the steel industry’s problems in the United States, and certainly not enough to overcome the periodic interruptions in production that occur when winter ice on the Great Lakes causes annual iron ore shortages.