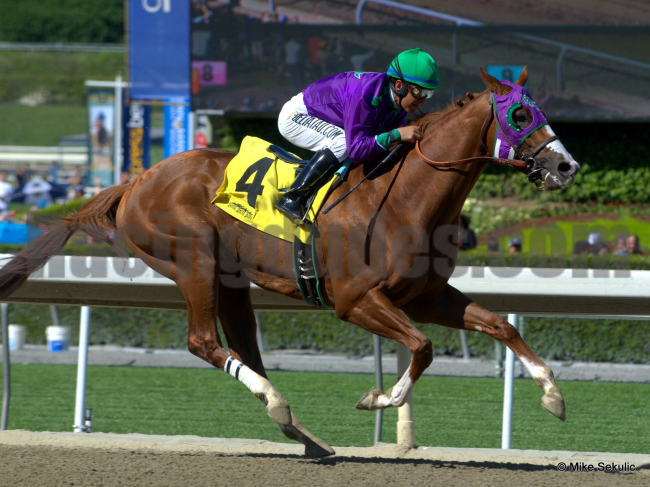 Even though entries will not be finalized until post positions are drawn this Wednesday, pretty much everyone agrees that the prohibitive favorite for the 2014 Kentucky Derby will be Santa Anita Derby winner California Chrome. According to oddsshark.com Chrome is the early favorite at 5/2 and, if this year is like other years at Churchill Downs, those odds will drop by post time on Saturday.

There is good reason for California Chrome to be favored in the “Run for the Roses.” The colt has run ten races in his career and won six of them, already earning over $1.1 million dollars. Before winning the Grade 1 Santa Anita Derby, Chrome won the G2 San Felipe. Both of those races were his first ventures against horses other than California-breds.

After California Chrome, the next choice is Wicked Strong at 13/2, followed by Danza (yes, he is named after Who’s the Boss star Tony Danza) at 8/1. Hoppertunity comes in at 12/1 and a horse named Samraat is next at 16/1. Four horses are listed at 20/1 in the early lines, including Dance With Fate, Ride On Curlin, Vicar’s In Trouble and Wildcat Red.

Many will put their dollars on California Chrome to win the Derby on Saturday, but according to Ted Whitley of The Whitley Group and horseracehandicappers.com, there are some reasons that Chrome might not be in the winner’s circle. “The race is limited to three-year-old…horses. That is the equivalent of sophomores and juniors in high school. They’re not matured yet and they’re probably one of the most unreliable [groups of] horses at the race track.” In addition to that, Whitley says, the horse will be running amid new surroundings: “California Chrome has never seen Churchill Downs race course. He’s never seen 150 thousand screaming people at one time. Even though he looks fast, there are many more reasons why he may not perform.”

The draw for post positions will take place on Wednesday and Whitley says Chrome’s trainer, Art Sherman, would love to get any position between No. 4 and No. 10. “Any closer to the inside, if he misses any kind of break at all, he’s behind ten or twelve horses. If he’s too far to the outside there’s enough speed [inside of him] to push him way back…which is a position he’s not used to running at all.” He goes on to point out that California Chrome may not be the right type of horse to win this race: “The profile of the Kentucky Derby winner is a horse well off the pace, even a deep closer, and from that standpoint he does not fit the profile.”

Even though the favorite clearly has the best credentials, Whitley says he is taking a close look at some other horses, including one early long-shot that might sneak into the money in Saturday’s Kentucky Derby: “There is a little horse that’s not getting any recognition that just won the Blue Grass Stakes, Dance With Fate, who comes from well off the pace. He could very easily win this race.” He also says Wicked Strong should be a part of bettors’ trifecta bet.

With everything said, though, Whitley concluded that California Chrome “has every right to win the race, and if he does, it won’t surprise any of us at all.” If the horse wins the Kentucky Derby, “the only thing we can hope for is if he goes on and takes the other two legs of the Triple Crown.The sport desperately needs a hero, a Triple Crown winner.”

The 144th running of the Kentucky Derby is Saturday, May 3 at Churchill Downs. The race begins at approximately 6:25 ET and will be aired on NBC.