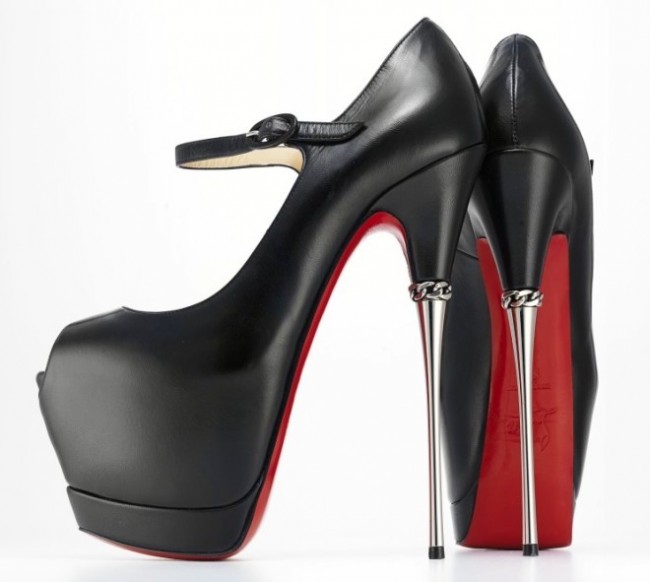 The Brooklyn Museum presents the exhibition Killer Heels: The Art of the High-Heeled Shoe from September 10 to February 15, 2015. The exhibition explores the history and mystique of the high-heeled shoe from 16th century Italian high platform silk chopines to contemporary stilettos found on runways and red carpets.

The high-heeled shoe is seen as a fashion statement, an outlet of creativity and identity, transformative power and a fantasy object to both the wearer and the designer. Through the ages, the high-heeled shoe has gone through many style shifts and symbolic intentions – from “architecturally inspired” wedges and platforms to impale-worthy stilettos and ones that defy classification.

The museum exhibit features more than 160 historical and contemporary heels from designers, design houses and museum costume collections that include Christian Louboutin, Manolo Blahnik, Vivienne Westwood and Prada to name a few. Alongside these designer names, the exhibit had six specially commissioned short films inspired by high heels.

The exhibit draws attention to historic footwear including 16th century Italian chopines made from silk, wood and leather. Straight in design, with no differentiation between left and right, chopines were a Venetian style that extended to the rest of Italy and Europe by the early 17th century. Depending on the textile, these platforms were worn outside as an overshoe, while others, in fabrics like silk velvet, were meant solely for indoor use, worn only with stockings. 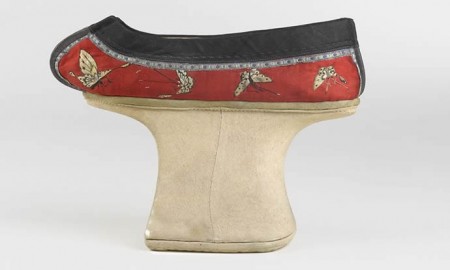 Seventieth century Italian paintings portrayed women with very long skirts, which implied that they are wearing the stylish heel. Chopines not only indicated the wearer’s high status in society by boosting her height, but also expressed her wealth.

Other featured footwear includes 18th century metal patterns, European leather and the 19th century silk embroidered Manchu platform shoes. Towering over the Chinese, the women of the reigning Manchus did not bind their feet. Instead, they wore overstated high footwear that featured a “concave heel in the center of the instep” that was four to six inches in height. Manchu footwear featured a slightly curved “horse-hoof” shape.

Vertical seams were stitched at the toes, and leather strips placed on the heels to retain the shoe’s shape. Their fabricated height gave them status over the Chinese, and the illusion of smallness without the pain and discomfort associated with bound feet.

Contemporary killer heels highlighted in the Brooklyn exhibit include shoes made with mink, fiberglass and even 3-D printed. While, more fantastically designed shoes on display feature the United Nude 8-inch heel designed for Lady Gaga in 2012 and the wool “heel hat” created by Elsa Schiaparelli in collaboration with Salvador Dali.

From the 1937-38 winter collection, the designer and artist collaboration attained a level of “Surrealist absurdity.” The premise of this shoe-hat was taken from a 1933 image taken by Dali’s wife of the artist wearing one shoe on his head, and another on his shoulder. Together with a black dress and red-lip embroidered jacket, the wool “heel hat” was designed by Schiaparelli, who was creating movie costumes at the time.

Another innovative heel for the show is the “Nova” shoe designed by Zaha Hadid and made from chromed vinyl rubber, Nappa leather and fiberglass in 2013. The “Eamz” pump, designed by Rem D. Koolhaas features a steel inverted chair leg heel. United Nude designed the pump in tribute to the label’s distinguished “Lo Res” stylish chairs.

The “Killer Heels” exhibition at the Brooklyn Museum illustrates that high-heeled and platform footwear through the ages possess not only historical significance and artistic possibilities, but also no matter how traditional or conceptual the design may be, women will always reach new heights in the name of fashion.

The Metropolitan Museum of Art