London Marathon Is a Winner for Betting 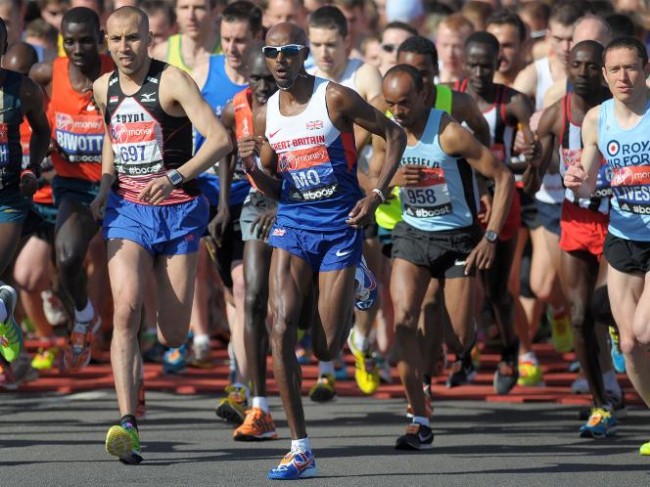 The 34th Annual London Marathon is currently underway, and after days of betting, bookmakers and the marathon’s winner will oblige gambling patrons with lucky sums of money. At approximately 09:15 Greenwich mean time (GMT), the elite women began the 26 mile long marathon followed later by the elite men at 10 a.m GMT.

Contrary to popular opinion, British society and laws are very relaxed on many controversial issues, and gambling is one of them. Britain legalized betting outlets under the Betting and Gaming act of 1961. Last year bookmakers were able to cash in on bets ranging from what the name of William and Kate’s baby would be or which horse would be the winner of the popular Grand Nation race to who would top the English Premier League table.

Two of the top bookmakers in Britain are Ladbrokes and William Hill, and each year betting on the winner of the London Marathon has affected the balance sheets of the two bookies. Last year, William Hill’s net revenue had an 18 percent increase from Great British Pound (GBP) 1.25 billion to GBP 1.49 billion, approximately $2.1 billion. Betting on the London Marathon added to the increase in that revenue. There are estimates that over GBP 1 million have already been placed on the marathon in bets.

So which London Marathon runners have the best odds and are the favorites of this year’s bookmakers and gamblers? Amid the 40,000 runners of men, women, children, commoners and celebrities, the main focus is on the elite females and the elite males. The elites are professional long distance runners who compete in international long distance events such as the Olympics, World Championships and marathons.

Where the elite men are concerned, the British public’s favorite is Somalian born Mo Farah. Farah, the current Olympic 10,000 and 5,000 meters champion runs under the British flag which allows him to garner much publicity, and he is on home turf.  As of now Farah’s odds are 8/1 Ladbrokes and 7/1 William Hill. Farah’s main competitions are last year’s London Marathon winner, Ethiopian, Tsegaye Kebede who won with a time of 2:06:04. Kebede odds are 3/1 Ladbrokes and 3/1 William Hills. There is also current marathon world record holder, Kenyan, Wilson Kipsang, who set a 2:03:23 in the Berlin Marathon of 2013. His place with Ladbrokes is 2/1 and 7/5 William Hill.

Also on the list of ones to watch are Ugandan Stephen Kiprotich, the 2012 Olympic Marathon champion who won with a time of 2:08:01, currently placing with Ladbrokes at 12/1 and 12/1 William Hill. There is also Kenyans Emmanuel Mutai who received silver in the London Marathon last year, and Geoffrey Mutai who beat Mo Farah in the New York Half-Marathon last month. Kenyans are world-renowned for their achievements in long distance championships.  As of now Ladbrokes has Emmanuel at 10/1 and Geoffrey 4/1. William Hill, Emmanuel 12/1 and Geoffrey 4/1.

Betting favorites among the women elites are last year’s London Marathon winner, Kenyan, Priscah Jeptoo who beat fellow countrywoman Edna Kiplagat with a time of 2:20:15. They are both going head to head for the winning title again this year, and head to head with Ladbrokes and Williams Hill. The Ladbrokes odds on Jeptoo is 2/1, William Hill 9/4. Kiplagat, Ladbrokes 13/8 and William Hill 6/4. Another Kenyan Kiplagat in the race is Florence, who set a world record last year in Barcelona’s Half-Marathon at a time of 1:05:12. Currently Ladbrokes has her at 5/1, William Hill 4/1.

Like Mo Farah, there is a member of the elite female that is also getting main focus, Ethiopian Tirunesh Dibaba, 28, known as The Baby Face Destroyer. Dibaba is said to be the greatest long distance runner of all time, and today she is running in the London Marathon for the first time. She is the current outdoors 5000 meters world record holder and the 10,000 meters world and Olympic winner. Ladbrokes has a 12/1 chance of her winning, William Hill 9/1. Dibaba commented that, “The London Marathon is new to me, but I’m prepared.”  Her main competitor could be fellow Ethiopian Tiki Gelana who won gold in London’s 2012 Olympics with a time of 2:23:07. Odds at Ladbrokes for Gelana is 11/4, William Hill 4/1.

The London Marathon began in Greenwich and will end at Buckingham Palace when in just only a matter of hours there will be a female and a male winner who will guarantee a bit of cash for a drink at the local pub for those who are betting on the race through Ladbrokes and Williams Hill. The marathon is sponsored by Sir Richard Branson’s Virgin Group.