Measles Cases Around US Spark Concerns of a Comeback 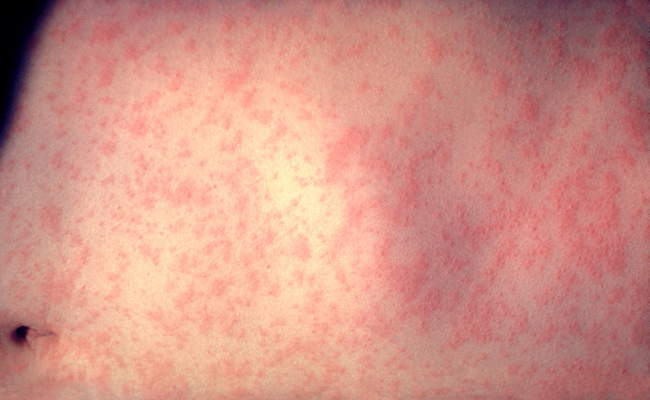 Measles cases in high numbers are being reported around the United States this year and are sparking concerns of a comeback of the illness. The viral infection was considered eliminated in the US in the year 2000 due to vaccinations resulting in a record low incidence of it. According to the US Centers for Disease Control and Prevention (CDC) more than 100 cases have been reported around the nation in a short three months. That is almost double the number usually seen in a whole year.

Measles is characterized by a rash, runny nose, high fever, coughing, and red, watery eyes that generally lasts five to six days. Death from the infection is rare. Usually the rash appears on the face and neck a few days after the fever has started, and then spread over the body. These symptoms can surface up to three weeks after exposure to the illness. Once infected, a person is contagious for four days before and after the appearance of the rash.

In an infected person, the measles virus occupies that person’s nose and throat mucus. It is therefore, spread through mucus or respiratory droplets that are expressed when coughing and sneezing. The virus can then live on a surface for up to two hours. “Measles is highly contagious and can spread easily through the air,” said New York City Health Commissioner Dr. Mary Bassett.

Multiple states around the US have reported many cases of the illness. The New York City Health Department has confirmed 25 cases of measles since February 5. These cases involved 13 adults and 12 children. According to Jean Weinberg, a spokesperson for the health department, of the 12 children, eight were too young for the vaccination, one was only two years old and had only gotten one dose of the measles, mumps, and rubella (MMR) vaccine, two children were not vaccinated, and one child’s vaccination status was unknown. Out of the adults, only four had received the vaccination, and the others had no affirmation of a previous vaccination.

Not only are the multiple numbers of measles cases raising concerns of the viral infection making a comeback in the US, but it also sparking concern that an “anti-vaccine movement” is allowing the illness to spread among the growing number of children and adults who aren’t vaccinated. There are three exemptions to claim against getting the vaccine including: allergies and immune disorders, religious beliefs, and personal beliefs. The state of California is one of 19 states that allow exemptions from the required school immunizations based on personal beliefs.

As of March 28, there were a reported 49 cases of measles in California for the year, compared to four over the same amount of time last year. According to state health officials, out of these cases, 30 had been in contact with people who have had the viral infection, 11 had traveled out of the US to areas where measles are common, three were in contact with people who were traveling internationally, and five are still being investigated. The California Department of Public Health (CDPH) director Dr. Ron Chapman, said in a statement “This dramatic jump in the number of measles cases is a reminder to get fully vaccinated.”

Since the reported 49 cases, there has been a Berkeley student diagnosed with the illness, and is in isolation. The University of California, Berkeley health center is offering vaccinations to students who need them. Jane Berreman, city of Berkeley’s public health officer is encouraging people to get immunized because a vaccination within 72 hours of exposure, can often mean  avoiding the sickness altogether.

On March 24, in Oregon an infant who did not have the MMR vaccine, and had recently traveled overseas went through the Portland International Airport. Later that day, it was confirmed that the baby had measles. As of the end of February, Oregon had a reported five cases of the illness. There was also a confirmed case in Springfield, Massachusetts at Baystate Medical Center. They are now working to contact the approximate 300 people who may have been exposed to the illness.

The measles is still prevalent in many parts of the world like Asia, Africa, Europe, and the Middle East, at an estimated 20 million cases worldwide. Last year, most cases in the US came from Europe.

As the occurrence of measles cases around the US continue to rise and spark the comeback concern, people are encouraged to get the MMR vaccine if they have not had it before. It carries a few possible side effects such as a fever, mild rash, and swelling glands in the neck and cheeks. If the vaccine is given at the recommended one year of age, it is considered 95 percent effective. If the second dose is also given, the risk of contracting the illness is virtually eliminated. If a person is not vaccinated and they are exposed, there is a 90 percent chance that they will be infected. The CDC considers a person immune if they were born before 1957, have had the vaccine, or have had the measles before.