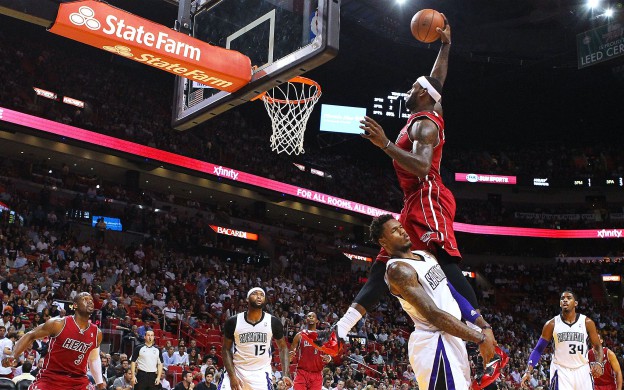 The Miami Heat pulled out a win 99- 88 in what was a hard fought match from the beginning. Miami started out trailing in the first half and struggled to find their rhythm. LeBron James was quoted as saying he does not know why they were out of rhythm, and you cannot control if the ball drops. Bobcats jumped to an early 14-7 lead causing Eric Spoelstra to call a time out. The pressure on the ball was the key factor to disrupting the Heat offense. Al Jefferson contributed to that additional pressure clogging the paint. However, as the game continued, Jefferson injured his foot.

The lack of Jefferson’s lateral movement, and limited mobility severely impacted the game for the Bobcats. In the second half the Heat took the game back and eventually beat Charlotte into submission. At one point, the Heat had a 20-point lead. However, the consistent efforts from Kemba Walker kept the game relatively close. Nevertheless, the Heat defense kept the Bobcats at bay despite their best efforts.

Key Players For The Bobcats

Kemba Walker took care of business on both ends of the court putting up 20 points in and outside of the paint. In fact, it was his valued effort that was saving in the game when it began to slip. He picked up the slack where Al Jefferson lacked with a commendable 5 rebounds, and 2 steals. When he could not get his shot he got his team involved dishing off 6 assist.

Al Jefferson came out with an explosive offensive game contributing most of the 1st quarter points. He is a player that Miami had a hard time stopping. Jefferson is one of the very few big men with outside game. He put up 18 points despite his injury, and also managed to command the paint with ten rebounds, and two blocks. His game was working in every facet.

Key Players For The Heat

LeBron James carried the Heat team on his back for most of the game. He exhausted his efforts in trying to get something to drop in the first quarter. However, the collective defensive effort of the whole team kept them within striking distance. Eventually James finally took that 9 points in the 1st and turned it into 27 points for the win. He begin to heat up during the second half and the stat sheet and reflected it. He kept the moral up even when the team was down showing his value on an off the court.

Dwayne Wade followed the lead of James and put up 23 points. Wade appeared to be having a below average game until he got in rhythm. He hammered the paint and distributed the ball like a point guard. At the end of the game Wade walked away with five assist to add to his impeccable point total.

The Bobcats pressured the ball to result in seven turnovers for Miami, and that was the very reason they were down. That defensive strategy is what they need to carry into the next game. However, on the other hand the Bobcats did get sloppy with the ball at times resulting in excessive turnovers. In fact, the Bobcats had 15 turnovers for 20 points. That performance is uncharacteristic for this ball club.

Al Jefferson injured his foot early in the first half, and that resulted in him hobbling the remainder of the game. Therefore, he was not as proficient as the Bobcats cats need him to be. Miami had a high performance off the bench with James Jones scoring 12 points, and Chris Anderson pulling down 10 rebounds.

End of Game Notes and Predictions

Bobcats just have to develop a new strategy that does not rely so heavily on Al Jefferson. They must continue to pressure the ball, and spread the floor to get Kemba Walker open.

Miami must come out of the gate in offensive rhythm. They have to get everyone involved on offense. Therefore, it can offset the emphasis on James to create the offense. It will be beneficial to keep the Bosh vs. Jefferson match up to exploit Jefferson’s injury. Lastly, they must shut down Kemba Walker by trapping him and forcing him to relinquish the ball.

Game Two will be an uphill battle for the Bobcats, but the Heat will come out on top. Overall this team has more depth. Plus, they have the advantage with the Bobcats’ star player being hurt.