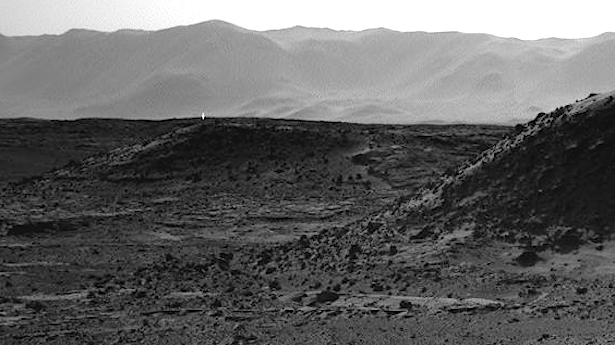 UFO enthusiasts are demanding answers after the NASA Mars rover Curiosity, captured an image of an unidentified light on the Martian planet. Leaders from the NASA Mars Curiosity team have offered several comprehensible explanations for the anomalous bright light captured by the rover, but not everyone is convinced this bright light is a natural phenomena or computer glitch.

It has been reported that bright spots in single-shot images were taken by the Navigation camera on the space agency’s Curiosity Mars rover on April 2 and April 3. It has also been reported that the bright lights were only captured by the rover’s stereo right-eye camera, but were failed to be captured by the left-eye camera. In the images captured by the right-eye containing the light, NASA deduced the spot of the light is in different locations of the image frame, and in both April 2nd and April 3rd, the light is captured at the ground surface level on the rim of the horizon in front of a crater. This has led to speculation from NASA’s image experts that the light phenomena was caused by the sun and the rocks on the Martian surface, not alien life.

One possibility that has been reached is that the light is a glint from the rocky surface of Mars reflecting sunlight. When the images were captured on April 2nd and April 3rd, the space agency agrees the sun was in the same direction as the light phenomena, west-northwest compared to the rover, at a relatively low point in the Martian sky. However it can not be denied that NASA rover captured this unidentified light on Mars on two separate days at different points with the same camera, so scientists speculate the possibility that these bright light phenomena could be sunlight that has reached the right-eye camera’s CCD(charged-coupled device) directly through vent holes in the camera housing. The light aligns precisely with the CCD cameras geometrically to the incoming Martian sunlight, The CCD hypothesis is plausible since it has happened previously with other cameras on Curiosity and some of the other space agency’s rover cameras. UFO and alien enthusiasts believe the light source is more than a sunlight phenomena, rather some alien reflection or entity, but NASA has ensured them that this is not the case.

It was surrendered by NASA that thousands of images have been received from the Mars rover Curiosity, and that weekly images appear to have bright spots. Scientists dismiss the bright lights as being caused by cosmic-ray hits or sunlight reflecting from the rock ridden surface of Mars. NASA scientists have come to these conclusions by checking with both the right and left-eyed camera views from the Mars rover’s navigation cameras. If the light phenomena’s do not appear captured by both camera views, it is dismissed as being cosmic ray glitches.

It was reported by NASA that the reason why this case of light sighting is different is that one of the camera views had a blocked view from the second camera on April 3rd. The human imagination still persists as the NASA rover captured more unidentified light on Mars, begging the question of if human beings are alone in the Universe. What ever the explanation, it is clear that through rover technical glitches or natural phenomena, the space agency is capturing images of unidentified lights on Mars, exciting alien and UFO enthusiasts.