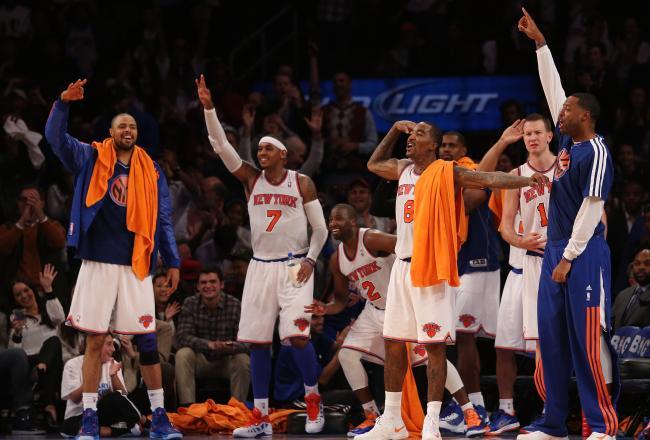 The New York Knicks manage to put another win under their belt, and for that they have a fighting chance in the east. The team who spends the majority of their season as an underdog is in the eighth seed. Though the playoff window is still open for Atlanta as of now they are still a game behind. The Knicks took an unexpected victory over the budding Brooklyn Nets on April 2. Winning against a strong Net team displayed a great deal of determination and confidence.

This Knicks team is a club that has gone through many ups and downs in this current season. They began at the bottom of the barrel, and somehow turned it around. Some would credit a degree of that fighting spirit to Phil Jackson joining the organization. However, those who follow the team would give that credit to the Knicks captain Carmelo Anthony. Anthony is the core of this team and their primary role player. He averages 28.0 points per game, 3.1 assist per game, plus an impressive 8.20 total rebounds. This guy is the glue that holds the Knicks together.

With their star player playing at the top of his game with the New York Knicks they have a fighting chance in the east after all. Now the question is if they do indeed come to the playoffs will they last? It may seem to be unclear to some, but the Knicks have confidence they can advance. The east is not as tough as it was in prior years, but it will not be a cakewalk for them.

There are three teams that stand to threaten the hope of the New York Knicks in their playoff run. Those teams are top dogs in this conference for many different reasons. The Miami Heat are at the top of the totem pole. The Indianan Pacers fall second, and The Chicago Bulls are forth. However, they all have many of the elements needed to make them championship contenders. Winning a series against any of these teams requires strong defense, ability to control the pace, and an understanding of how to counter their star players.

If The Knicks want to be the best in the east they just have to beat the best. Ultimately the finals come down to the best two teams in each conference. Since they are on a race to the top exploring their potential competitor is necessary. Therefore, the focus will be put on what the Knicks can expect with The Heat.

The Miami Heat are the two time champs, and have one not-so-secret weapon that provides them with an unfair advantage. LeBron James is their dominant forward that averages 26.6 points per game. James provides the proper spacing for The Heat to run the floor by commanding the double team. He also doubles back on defense to apply pressure on the ball. Plus, James has an inside and outside game. If you cut off his lane to the basket, he can get his own shot. However, that is not the half of it Miami has a complete team full of beasts. Dwayne Wade is arguably one of the best 30-something’s in his position right now. He began as a slasher and still has that explosiveness off the dribble. All in all they have the highest spot and do not plan on giving it up so easily. This would indeed be a hard fought battle if it comes down to it.

This New York Knicks team has an underwhelming 33- 43 record that does not translate into consistency or dominance. Therefore, it is far fetched to believe this team will make it out of the second round. However, the beauty of sports is there is always a possibility the underdogs can rise from the trenches. That is the very reason Anthony still believes that the Knicks have a fighting chance in the east. In the grand scheme of things if this team can out play LeBron James, Paul George, and Joakim Noah they have a shot.