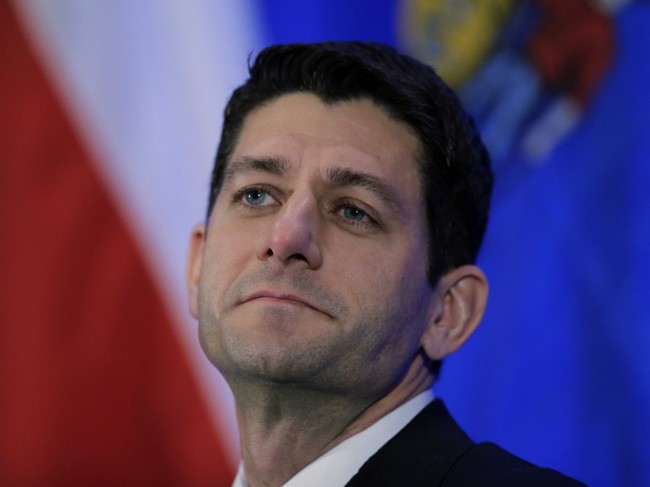 The Wisconsin Republican and former vice-presidential hopeful, Paul Ryan, has another of his famous budget plans in the works with the promise that it will balance the budget in ten years’ time. That is a huge promise to make and many people, including economic experts and Sarah Palin, do not believe his plan can do it. What they do see is a disastrous outcome for the American people and a focus, not on helping the poor, but making it more difficult for them to survive. With this in mind, as well as Paul Ryan’s status as a prominent Catholic politician, it is easy to see that his real religion is actually Republican party politics.

It is an easy thing to say that a budget plan is bad, but looking at the specifics of Ryan’s budget is a material lesson in why people are making that claim. For instance, it would slash food stamp programs that give substantial necessary aid to children, working-poor families, seniors, and people with disabilities. The plan would also cut scholarships that make it easier for low-income families to get their kids in college and on a path of upward mobility. It would also cut countless other low-income programs, including the Earned Income Tax Credit which affects lower income families, especially those with children. Based on this evidence, Robert Greenstein, the president of the Center on Budget and Policy Priorities, was able to say that the Ryan plan will only create more problems for low-income people in the United States while making life easier for the wealthy.

These changes follow a familiar line in Republican thinking which has often called for a reform of the tax code and a decrease in spending that usually comes at the cost of aid programs. Getting rid of food stamps is not a new idea and has been floated by many other Republican politicians. In fact, House Republicans rammed through a bill to cut billions of dollars in food stamps programs, leading one Democrat to say that he had never seen so “heartless” a bill.

This all hinges on the ideological principle that “entitlement” programs are bad and create people who are “dependent” on the government for all of their needs. The image that Republicans like to create is that of the generational welfare abuser who does not work but has everything paid for by the government. Many times the story of a person on welfare driving a new Cadillac or eating lobster dinner is invoked as examples of abuse of such programs. With this new budget proposal, Paul Ryan looks like just the latest in a long line of ultra-conservative Republicans who adhere to the radical party line in order to drum up support with the Tea Party base.

Ryan is even making his plan and publicizing it in opposition to many Christian groups that oppose it as immoral. Faithful America, an online community focused on Christian social justice, criticized Marquette University for giving Ryan the Les Aspin Center 2014 Public Service Award because of his plan. Their stance is that as a Christian university, Marquette should not be endorsing a politician whose plan affects the poor in ways that the Catholic church sees as immoral.

With this opposition in mind, a renewed look at Paul Ryan and his budget seems to indicate that he is following the Republican party’s political line far more rigorously than he is that of his beloved Catholic Church. The Catholic church teaches a “preferential option for the poor,” which asks that people examine every part of their lives, including politics, from a stance of the impact on the poor. Ryan’s impact on the poor, according to informed economists, is the make it harder for them to rise above poverty, feed and house their children, and send them to college. In the eyes of some religious groups, including Faithful America, this is an abandonment of Christian principle and “immoral.”

Paul Ryan’s budget is so deeply partisan that it goes farther than any other Republican wants to go when it comes to repealing the Affordable Care Act (ACA), which Ryan consistently calls “Obamacare.” Most Republicans realize that parts of the ACA are quite popular with voters, including allowing young adults to stay on their family’s insurance plans and providing protections for people with pre-existing conditions. But Paul Ryan’s plan includes a wholesale, complete reversal of the ACA, including these popular measures. This goes much farther than anyone else in the Republican party has said they are willing to go, pointing once again to Ryan’s extreme devotion to hardliner Republican policy.

Even Sarah Palin, the Fox News commentator and Republican party darling, disapproves of the plan, though she seems to think it does not do enough to cut spending overall. She pointed out to Sean Hannity that it increases spending over ten years by a dollar amount in the trillions. In a grand display of phonics and musical theater knowledge, she said that the “T” in “trillion” stands for “trouble,” my friend. Hannity ended up agreeing with her, saying that he wished there would be a spending “freeze,” something which is much different from the cuts Ryan is proposing.

Paul Ryan’s new budget plan is filled with all the hallmarks of a Republican hack-and-slash economic approach in which any programs that help the poor are fair game. This plan cuts so many of these programs that economists are forecasting doom and gloom should it ever be put in place. Other members of the Republican party, including Sarah Palin, do not like the plan and many disagree with the substance of it that creates a total end to the ACA, including the popular parts that those politicians are saying they support. Meanwhile, Christian advocacy groups are saying that the plan violates important portions of Catholic doctrine, including the preferential option for the poor, and have called the plan immoral. Paul Ryan has found himself in a difficult position with his Catholic beliefs at odds with his Republican party politics and in choosing one over the other he will eventually show everyone what his real religion is.