Private Lives of Nashville Wives: To Tell the Truth (Recap/Review) 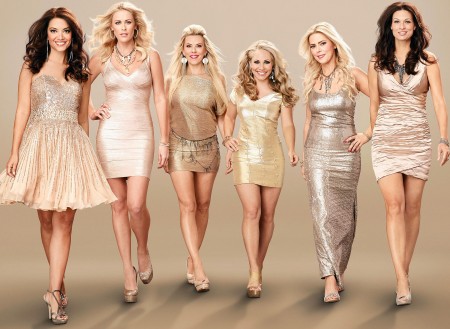 Last night’s episode of Private Lives of Nashville Wives: To Tell the Truth contains more cringeworthy moments than any in season one so far. Sarah Davidson, who is going through a divorce with her husband Dallas, is performing in Chicago and the ladies have all gone up to give her some much needed support. Sarah goes up north in a tour bus that seems to be a lot happier than the bus ride undertaken by the remaining gals who are taking the road trip from hell.

Before the bus trip, Cassie, Erika, Anna, Betty, Tina and Jenny meet at Anna’s house for a game of truth or dare and things get pretty heated when some of the group do not want to answer the questions or don’t answer in a way that pleases Jenny. The fact that Erika and Jenny do not get along becomes even more apparent when the business woman picks on the former soap actress because of her refusal to answer some questions. Even Cassie gets grief from Jenny with her truthful responses in the game. By the time the party winds down, the prospect of being trapped with her tormentor on a bus has Erika worried.

Sarah is focussing on her upcoming musical performance and her band love the bus chosen for their journey. On the supporter’s bus, Erika sparks off a storm from Jenny when she comes on board wearing an “adoption” t-shirt. Her attitude puzzles Cassie and both women don’t know why there was such a negative reaction. The mother of one also gives her opinion on private adoption and it isn’t very positive. The country singer is trying to get used to the fact that she’s not in a relationship anymore and Sarah gets a bit tearful when explaining how alone she feels.

The conversation on the bus veers off into fidelity and monogamy. Betty reveals to the group that infidelity is something that she’s learned to live with and Anna agrees with her. While she explains that her marriage to Raoul is not an open one, they both forgive any “mistakes” that the other may make. The rest of the women are stunned at this admission. Meanwhile, the men go on a fishing trip and Gary wonders if the ladies are having as much fun as they are. This week’s episode of Private Lives of Nashville Wives: To Tell the Truth
is not just about the truthfulness, it’s also about Sarah proving that she should be pursuing her dream.

The bus bonding is not going well as Jenny declares that Cassie is not being truthful or acting like herself, she then moves onto Erika and tells her pretty much the same thing. The two younger wives of the group are not happy with Jenny at the moment and after she says that the ladies friendships are TBD, to be determined. Betty rips a strip off of the business owner and tells her that she’s pushy.

Sarah comes up to see Jenny and finds out that the bus trip was not something that she enjoyed. Betty, Erika and Cassie have a bonding moment after the bus journey, where the twin stood up to Jenny for both the younger women. Sarah’s performance shows just how great she is as a singer. The ladies and the Chicago crowd really react well to her and its plain to see that she is doing just what she should be doing.

Later, Erika takes Jenny on after a few drinks. Afterward the “pushy” business woman is not on the bus for the return trip. The twins and Cassie reach out to Erika and this week’s episode of Private Lives of Nashville Wives: To Tell the Truth, proves that the truth hurts. Even Jenny, who insists that not everyone is being truthful with her, finds that she wasn’t really ready to hear how the other women perceived her.