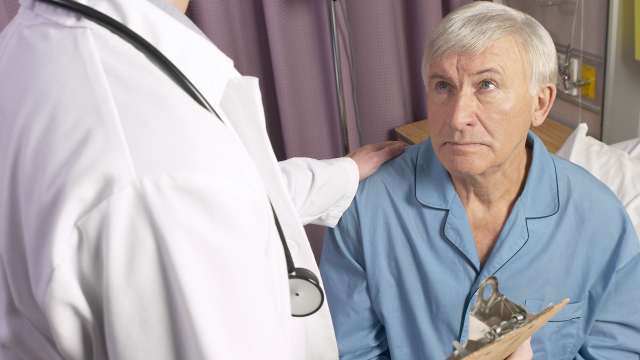 According to the American Cancer Society, prostate cancer is the most common cancer among the male demographic and the second leading cause of cancer related death in men, in the United States. The survival rate of men who have been diagnosed with prostate disease is high, but if left improperly diagnosed the potential aggressiveness of the disease could be deadly. With one in seven men expected to be diagnosed during his lifetime and nearly 30,000 men expected to die from the disease in 2014 alone, proper methods of diagnosis are essential for early detection and survival. New research, published in the British Journal of Cancer, revealed that current prostate cancer screenings have failed in adequately diagnosing the severity of the disease, which has potentially life threatening consequences for patients.

A new study from the Cancer Research UK Cambridge found that the current tests for detecting the disease in the prostate gland too often underestimate its aggressiveness. Researchers discovered dangerous tumors in more than 50 percent of men that were initially diagnosed with slow-growing tumors that were confined to the prostate gland.

The findings exhibited that out of 415 patients who had been diagnosed with slow-growing and confined prostate cancer, 209 of them had tumors removed which had been more advanced than the original diagnosis predicted; and 103 of the men had cancer that was not confined to the prostate as it had been previously assessed, as it had spread to areas of the body beyond the prostate gland.

As far as detection methods go, the initial screening for prostate cancer involves a digital rectal exam (DRE) where the doctor examines the rectum for bumps on the prostate that may be cancerous. Another method of testing is the prostate-specific antigen (PSA) blood test, which is used to detect prostate cancer in men who have not experienced any symptoms, and is also used in determining the stage, as well as monitoring the progression of the disease once it has been diagnosed. If these initial tests return abnormal results, then a biopsy is performed using a special device that removes a sample of body tissue with a thin and hollow needle. The biopsy is then examined for cancer cells.

The American Cancer Society explains that even though biopsies are meant to show cancer cells in the tissue sample, it is not uncommon for them to miss the cancer and give a false negative result. If the needle used to extract the tissue sample does not pass through the part of the prostate which contain the cancer cells, then it could appear that a patient does not have cancer when he might after all. Because of this, repeated biopsies are necessary.

The combination of all of these tests act as an active monitoring system for the progression of cancer in the prostate gland, which is referred to as active surveillance. Active surveillance has been a relatively safe way to monitor the cancer but the new study out of Cambridge has shown that the current screenings for prostate cancer fail in adequately diagnosing the severity of the cancer, which casts doubt on the ability of these tests to provide a reliable diagnosis and appropriate methods of treatment.

Doctor Greg Shaw, from the Cancer Research Cambridge, said that there is an, “urgent need for better tests to define how aggressive a prostate cancer is,” in a patient from the start. He continues to explain that while active surveillance is a safe approach for men, “nearly a third will end up needing surgery,” or some alternative form of treatment within five years.

Prostate specialist Malcolm Mason, from the Cancer Research at Cambridge, explained that the biopsy, MRI, and PSA tests are the best methods currently available to determine the severity of prostate cancers, but unfortunately they are too often inaccurate. Professor Mason argues that more effective methods of assessing the stage and intensity of cancer in the prostate are required so that men no longer have to unnecessarily undergo treatment, while ensuring proper cancer detection and treatment for those patients that really need it.

The ACS estimates that this year, 233,000 new cases of prostate disease will be diagnosed. For men with slow-growing prostate cancer, most will survive with the appropriate treatment. However with the results of this new study showing how some men are misdiagnosed, there is a threat that more lives will be threatened by a more aggressive stage of cancer in the prostate gland, and that it will progress unnoticed. This aggressive and dangerous form of the disease is known as the “tiger,” which may spread very quickly if the tumor is not surgically removed or destroyed using alternative treatments.

The Director of Research at Prostate Cancer UK, Dr. Lian Frame, feels strongly that accurate diagnosis is the biggest challenge that prostate cancer faces. Dr. Frame continues to articulate that the study’s findings emphasize the inefficiency of existing tests. Without a precise picture of how aggressive the disease really is, patients and their doctors are forced to make decision about treatment blindly.

Often, because tests often fail to assess the severity of prostate cancer, there is a high chance of cancer recurrence because in many cases the cancer has spread to others parts of the body. While these findings are disappointing, good news was delivered earlier this week when researchers from the Princess Margaret Cancer Center and the University of Toronto in Canada revealed that they were successful in creating a test that can predict whether a man is at high risk of prostate cancer recurrence.

Echoing the words of Professor Mason, lead researcher Professor Robert Bristow said that because existing tests for identifying high risk patients are inaccurate, new tests need to be designed that are also better at predicting risk of recurrence. Professor Bristow’s research team set out to design such a test and were successful in developing a method for determining a man’s risk of prostate cancer, using genetic signature and tumor oxygen levels, that was accurate by nearly 80 percent.

Although this the test will take at least two or three years to validate, the findings could lead to a new test for patients with prostate cancer, “that will enable doctors to determine which patients need treatment that is not confined to the prostate region.” This news comes as a relief to the dismal reports on the tests currently available to prostate cancer patients today, and provides hope that even though prostate cancer screenings can fail to adequately diagnose the severity of the disease, new research is being done to remedy the problem.