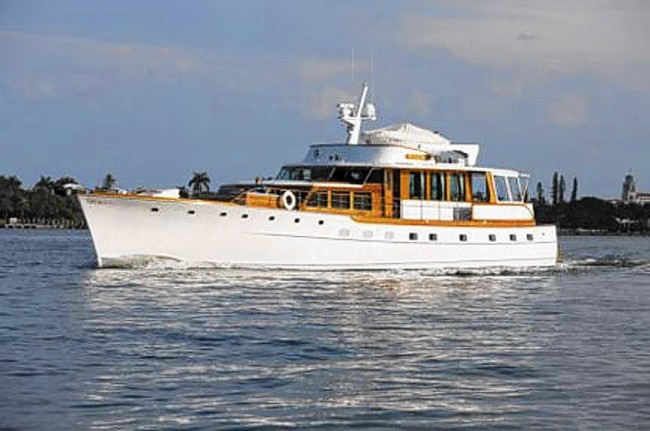 A “Royal Couple” lived on a $1.2 million yacht while collecting welfare benefits, according to Minnesota authorities. Colin Chisholm III and his wife Andrea Chisholm, who claim to be descended from Scottish royalty, have been accused by authorities of collecting $167,000 in public assistance including food stamps, welfare and medical assistance. After being accused of fraudulently collecting welfare benefits, they had fled the country and were believed to be in the Bahamas. The couple was on the run for seven weeks before they were arrested Tuesday near Port Everglades, Florida. They were being held without bail in the Broward County Jail.

Authorities claim the couple were living aboard a $1.2 million yacht named the Andrea Aras, and driving a $30,000 Lexus while collecting public assistance benefits. According to Minnesota authorities, the Chisholms started collecting welfare benefits in Minnesota in 2005. The criminal complaint states that the Chisholms told Public Assistance workers they had no jobs, no car and had only $80 in cash to their name. Only weeks after they started receiving benefits, they purchased a $1.2 million yacht in Florida, where they began to receive welfare benefits from the state of Florida, as well. The yacht was ultimately seized by the Coast guard.

According to the complaint filed in Minnesota court, the Chisholms also failed to report deposits of nearly $3 million in various bank accounts to cover for their extravagant lifestyle. They also failed to report living in luxury waterfront homes in Minnesota and Florida. Andrea Chisholm had also received prenatal care benefits paid for by the state while she was pregnant in 2006 and 2007, according to the complaint. Minnesota picked up the $22,000 tab when her son was born in Palm Beach, Fl., according to authorities.

Colin Chisholm purports himself to be a Scottish aristocrat, according to the complaint. He claims to be a wealthy executive and chief executive officer in the TCN Network. The complaint also alleges that Andrea Chisholm is a dog kennel owner and championship breeder of pedigree Cavalier King Charles Spaniels dogs. One of her spaniels was an award winner at the Westminster Dog Show.

Prosecutors had said they will seek a harsher sentence because of the aggravating factors involved in the Chisholms case. Welfare fraud is usually a probationary offense, but prosecutors believe the Chisholms perpetrated a major economic offense, and will seek a sentence accordingly. The Chisholms are charged with one count of wrongly obtaining public assistance of more than $35,000, according to the complaint.

Its unclear whether this “Royal Couple” who lived on a $1.2 million yacht while collecting welfare benefits will see any jail time. Minnesota authorities have said they are pursing a sentence that they hope will result in the Chisholms receiving  “hard time.”