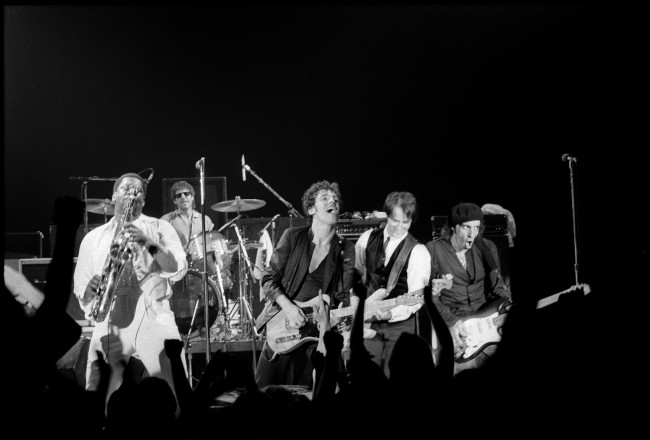 The E Street band, or some form thereof, has been performing alongside the “Boss” since 1972. They can be heard on albums such as Born to Run, Darkness on the Edge of Town, and Born in the U.S.A. Perhaps the most notable member of the group was saxophone legend Clarence Clemons. Not only did Clemons and Springsteen have an amazing rapport as performers, the two endured a long friendship, oftentimes illustrated by Springsteen during his onstage rants between songs. Sadly, Clemons passed away in 2011, due to complications from a stroke.

Another well-known member of “E Street” is Steven Van Zandt.  Multitudes of TV fans know him better as Silvio Dante from HBO’s hit series The Sopranos. He also currently stars in the Netflix series Lilyhammer. However, Van Zandt goes back with Springsteen about four decades and has been a guitarist and vocalist with the E Street Band since 1975. Although, he did take a hiatus from 1984 to 1995, Van Zandt has become a staple of the E Street Band, and he is sure to take part in the performance with Bruce Springsteen at the 2014 Rock and Roll Hall of Fame extravaganza.

Other members of the E Street Band have also become standouts in the world of music and entertainment over the years. Max Weinberg, longtime drummer of the group, achieved great notoriety as bandleader for Conan O’Brien during his tenure as host for both Late Night and The Tonight Show. Not only did Max set the pace for the musical backing, he was often featured in quirky sketches.

Aside from the undoubtedly roof-crumbling performance from Bruce Springsteen and the E Street Band, during the upcoming 2014 Rock and Roll Hall of Fame ceremony, there are many other moments to look forward to. A touching point of the evening is sure to be the induction of Linda Ronstadt, who suffers from Parkinson’s disease and can no longer perform. She will be inducted by Eagles singer Glenn Frey and celebrated with a performance from Stevie Nicks, Carrie Underwood, Bonnie Raitt, Emmylou Harris and Sheryl Crow. Other inductees of the night include Peter Gabriel, Hall and Oates, Dave Groll and Kist Novoselic of Nirvana, who are all rumored to perform. Kiss will be inducted, but has made the decision not to perform. The show is set to air on HBO May 31.

Springsteen to Perform With E Street at 2014 Rock and Roll Hall of Fame added by Josh Taub on April 1, 2014
View all posts by Josh Taub →