Strahan Is on the Ball 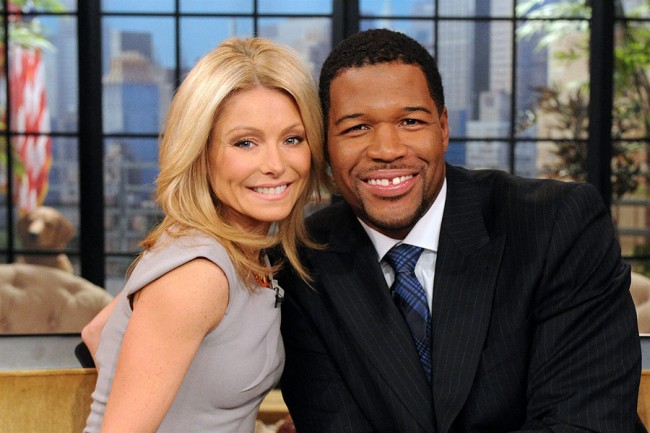 Michael Strahan has been on the ball and on a roll lately with a winning streak of good luck as he carves a name out for himself in the world of entertainment.  With the recent announcement that he has been signed to co-host ABC’s Good Morning America (GMA), Michael, 42, seems unstoppable.

Michael used his current morning talk show, Live! With Kelly and Michael, where he and Kelly Ripa play the dynamic duo of morning television, as the platform to make the confirmation about his new deal with ABC.  Strahan expressed no desire to leave his current gig, and plans to co-host both GMA and Live! Michael has been hosting with Kelly Ripa since 2012, when he was selected to replace Regis Philbin on the long running morning television program. Michael secured the co-host position after he became a fan favorite while filling in for Regis as a guest host.

Two male cast members have already departed from GMA within the last few months.  Sam Champion left for The Weather Channel, and Josh Elliot was snapped up by NBC Sports. It’s reported that ABC approached Strahan before the exit of Elliot from the network. Strahan will join company with Robin Roberts, Amy Robach, Lara Spencer and George Stephanopoulos at GMA. Michael previously had a guest hosting stint with GMA, which might have been a precursor to his current deal with the high rated morning talk show.

Strahan may be the new media darling, but his core base fans have been followers of his since the glory days of playing ball with the American football team New York Giants. Strahan helped to propel the Giants towards a Super Bowl win in 2008, the year he retired. Michael’s passion for his former sporting career is expressed on Fox’s NFL pregame show where he is currently a panelist.

Sport is an integral part of Michael’s DNA.  Strahan was born in Houston, Texas, to a father who was a boxer and a mother who coached a basketball team. He is also the nephew of retired professional footballer, Arthur Strahan.  After spending 9 years in Mannheim, Germany, Michael returned to Texas, where he attended Westbury High School and began to play football in his senior year. He continued playing the sport at Texas Southern University.

While currently building his high-profile resume on television as a host, sports commentator, sitcom actor and making appearances in numerous television commercials; Strahan’s accolades in his sporting career is also quite impressive. He is the NFL record holder for most sacks in a single season, 2001. He’s also a seven-time Pro Bowl Player and a six-time All-Pro defensive end.  Michael Strahan will officially be inducted into the Pro Football Hall of Fame this year.

The ball is now in Michael Strahan’s court and even more eyes will be on him as he heads over to co-host GMA, where he will work on a semi-regular basis within the first hour of the show. It hasn’t yet been confirmed as to when Strahan’s first appearance with the current GMA team will be.