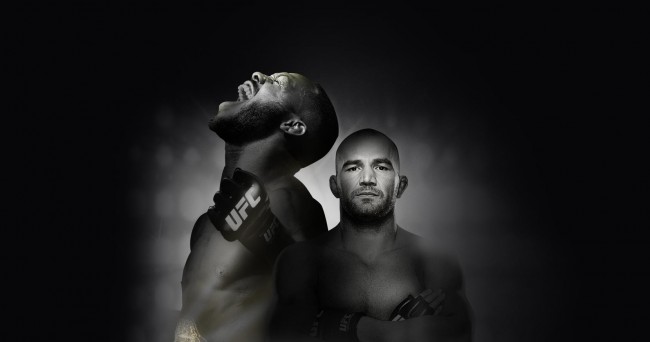 UFC172 went down live in Baltimore, Maryland Saturday night and featured another hefty card that was headlined by a light heavyweight championship bout, as pound-for-pound king, Jon “Bones” Jones, looked to end Glover Teixeira’s 20-fight win streak to retain his title. The night was stacked with finishes and a few surprises as the UFC turns the page after another premiere show.

Jones got off to another slow start, but displayed to the packed house at The Baltimore Arena what a Kung Fu movie probably looks like in his head. He threw everything at Teixeira: elbows, knees, wheel kicks, axe kicks and more. Most notably, though, Jones utilized his reach to stiff-arm the Brazilian away, and at times dipped his fingers into Teixeira’s eyes. He was warned for this by referee, Dan Miragliotta, early in the fight, but did not alter his strategy to drape his hands over his opponents face in between landing a massive volume of strikes. Teixeira looked most effective in round one, but faded to the more talented Jones, all while staying somewhat dangerous until the end. All three judges gave every round to Jones, who at the finish of the fight was dancing around the Octagon, showboating, and holding his hands up over his head before the final horn. For all of his dominance, Jones failed once again to finish, and found himself an outlier on a night when most of the other fighters did not need any of the judge’s opinions on their matches. While he is surely the undisputed champion at 205lbs, Jones’ reputation has been in decline for incidents occurring outside of the cage and did little to change fan’s minds inside the cage tonight, other than to flash a fine display of mixed martial arts skill.

Davis has been campaigning to be the next in line to get a shot at the light heavyweight title by jabbering at Jones via the media regarding the Champ’s last bout with his training partner, Alexander Gustafsson. What Davis needed besides working some extracurricular heat with Jones was a clear-cut victory over the returning Anthony “Rumble” Johnson. Instead, Davis was flustered, frustrated, and beat down by the most impressive looking Johnson the fight world may have seen yet. Johnson stuffed Davis’ takedown attempts, kept the fight standing, and landed bombs on the Penn State wrestler that should quiet any talk of a Jones/Davis face off anytime soon. Instead, Gustafsson, who gave the champion his most serious challenge, will probably be up again next for a rematch. The light heavyweight division might be the weakest it has been in years, as Jones remains clearly atop a heap of guys fighting over his scraps.

Rockhold looked amazing and Boetsch looked like a fighter who may be seeking an MMA promotion to fight in other than the UFC sooner rather than later. The fight was quick, as Rockhold rolled out of a Boetsch takedown attempt and ended up putting his opponent in an inverted triangle that he soon transitioned to a kimura finish. After the fight, Rockhold called out Vitor Belfort who defeated him nearly a year ago and is currently in exile from active fighting until he figures out his TRT situation now that testosterone therapy is banned by the major sanctioning commissions.  He also mentioned to Joe Rogan in the post-fight interview that he is game to pick up where Tim Kennedy left off, and finish Michael Bisping, if the payday is lucrative enough.

Medeiros, who trains in Stockton, California with the hard-nosed Diaz brothers, had the courtesy not to tap to a deep guillotine choke from Miller, and instead made his best human-blanket impression while making a quick trip to dreamland as Miller celebrated his victory underneath him. After throwing jabs in the center of the Octagon, Miller pushed the action to the cage, where he landed a left to the body that crumpled Medeiros. Miller then quickly snatched him up in a lightning-quick guillotine and put him to sleep.

Holloway was 1:21 away from facing a judge’s decision in a fight that was scored 1-1 going into the third round. The action was intense throughout, as many expected, with each man throwing hard punches and leg kicks. Holloway began to get the better of the exchanges in round two and three and hit Fili with two hard lefts and an uppercut that sent his opponent into survival mode, diving for a takedown. Instead, Holloway scooped the dazed Fili into a guillotine that left the young fighter tapping furiously.

Other notable results from UFC 172 included Joespeh Benavidez earning a $50,000 performance bonus by locking up Tim Elliott in a sick choke at the end of the first round after Elliott had him in trouble in the first two minutes of the fight, and Danny Castillo flooring Charlie Brenneman for a second round KO. Takanori Gomi added another win to his considerable resume as he out struck Isaac Vallie-Flagg to take the decision victory in the fight of the night. Both Gomi and Vallie-Flagg earned 50k for their scrap. Also, in the lone Fight Pass prelim, Chris “The Real Deal” Beal made his UFC debut a memorable one by landing an incredible flying knee that knocked Patrick Williams out cold and earned him a 50k performance bonus as well.