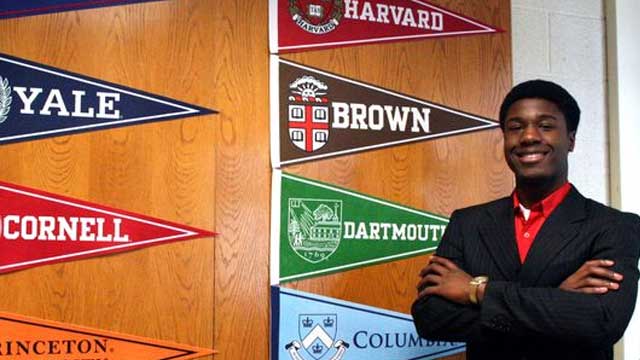 Yale was the institution finally picked by New York high school student Kwasi Enin on Wednesday after being accepted to all eight Ivy League schools in the U.S.. The young man applied to Yale as well as Harvard, Brown, Columbia, University of Pennsylvania, Dartmouth, Princeton, and Cornell.

Putting on a show for his school with a pretend news conference, the Long Island high school senior announced his pick in front the the entire student body at his high school, as well as teachers and media members who showed up. When he was accepted to all of the Ivy League schools, Enin had to visit them and see which one he felt the most comfortable with. The high-schooler said that a visit to the campus in New Haven, Conn., helped him to make and finalize his decision. Enin said that his experience was “incredible” and that he met geniuses from all around the world. He also said that the people being so friendly and inviting there, combined with meeting people who he felt shared his deep appreciation and love for music, helped him to lock down his decision to pick Yale as his university as well.

Enin scored 2250 on his SAT, out of a possible 2400, and this placed him in the 98th percentile nationwide. He was also ranked 11th in his class at the public school that he attended. His father, in an interview, said that the young man was not sheltered, and was given a lot of freedom, but that his parents expected a great deal from him in terms of academics and good behavior. They said that they are hoping he will stay focused and not get distracted as he continues on in his future endeavors.

Enin said that he applied to all eight of the Ivy League schools thinking that they were all great and that getting into even just one would be wonderful. He said that he was shocked when all of the acceptances started rolling in from the schools. His principal said that he is not just a wonderful student, but also extremely dedicated to extra-curriclar activities, and talented in a lot of other areas. Enin serves in Student Government at his school, plays three instruments in the school’s chamber orchestra, sings in an a cappella group, plays for the school’s track and field team, and has had lead roles in school plays since his freshman year. Somehow, between all these activities, Enin still finds time to get grades good enough to get accepted into all of the Ivy League universities and also to volunteer at a local hospital.

Before Enin was accepted to all eight of the Ivy League schools, and also before picking Yale, the student was considering and had been accepted to three New York state universities and to Duke University. Ivy League Schools have the most selective acceptance rates in the country, with the top most selective sometimes only accepting less than 6 percent of applicants (Harvard’s acceptance rate for the class of 2017 was just 5.9%, according to its admissions site.