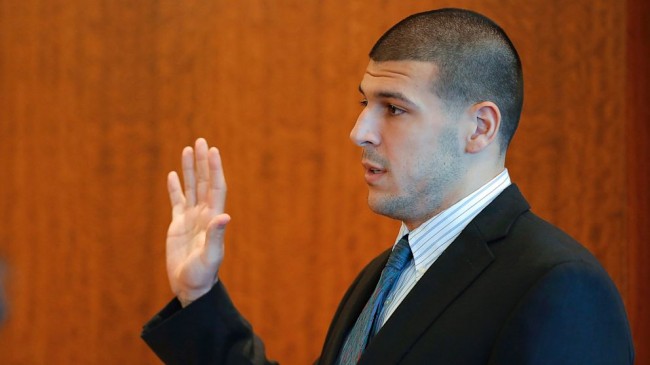 After recent news revealing his indictment on two counts of homicide in 2012, some are saying they find it hard to believe that former New England Patriots Aaron Hernandez is innocent of charges for the June 2013 shooting death of Odin Lloyd. They say Hernandez has already proved he has poor character. Is it possible that he’s a deceptive liar? He gladly accepted millions of dollars to play 12 games that same season knowing that he had already committed two murders the previous summer, say some former fans.

Just six weeks after allegedly killing Daniel de Abreu and Safiro Furtado, with whom he had a previous, undisclosed altercation at a nightclub, while stopped at a red light in Boston’s South End theater district on the evening of July 16, 2012, Hernandez signed a 5-year/$40 million contract, becoming the first NFL player ever to receive such a lofty extension. It seems that the Patriots’ owner, Robert Kraft, was convinced that Hernandez was worth that much.

Following the signing, Hernandez elaborated on how his family had inspired him to “make smart decisions” and that his mother had raised him to have character worthy of such a paycheck. This left many scratching their heads and wondering: who was he trying to convince…the press or himself? Hernandez sang Robert Kraft’s praises for recognizing that he could “trust [his] character” entrusting him with that much money to continue playing professional football for the highly regarded franchise.

However, it would seem that maybe Hernandez’ guilt was getting to him after all upon receiving more money than most people will ever see in their lifetime when he, in turn, contributed $50,000 to a fund in honor of Kraft’s late wife Myra. Hernandez openly admitted that Kraft “didn’t need to give” him that much money. Could it have possibly been the voice of a guilty conscience? Hernandez further stated that knowing that Kraft thinks he “deserve(s)” that amount and “trusts” him to “make the right decisions” meant a lot to him. Well…$40 million would mean a lot to anyone.

Hernandez has been held without bail while awaiting trial for the 2013 incident in which he plead “not guilty” to charges for killing a man near his Massachusetts home. By law Hernandez has the right to a fair trial and is innocent until found guilty, but many fans are asking who could believe him when he may have been concealing his responsibility for the deaths of two men the entire 2012 season?

Hernandez claimed that the league and franchise had changed him as a person and that he knew that he couldn’t be “reckless.” Hernandez must not be too familiar with the definition of the word; for what’s more reckless than allegedly chasing someone in a SUV only to open fire, wound, and kill two people?

Although ESPN legal analyst Ryan Smith claims that the recent case was much stronger against Hernandez than the looming Odin case, and his team of lawyers state that “under our system of justice” he is innocent of the most recent charges and is looking forward to his day in court, it seems likely that Hernandez will be found just as guilty for that murder.

Some sports fans are saying Hernandez must have been laughing all the way to the bank thinking that he had, literally, gotten away with murder. If he is, indeed, guilty of the charges against him, for the entire 2012 season, Hernandez knew what he had done; he had committed cold-blooded murder; yet, he accepted his extension and continued to play that season and remain a Patriot (until his release following the June 2013 charges) deceiving his coaches, his team mates, the media, and his fans. He not only played the game, he may just have played everyone.