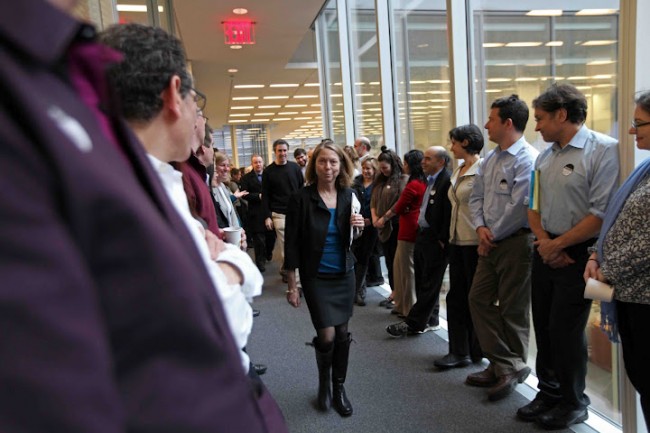 Following the firing of the The New York Time’s first female executive editor, Jill Abramson, the company has been subject to criticisms of sexism and discrimination which its publisher, Arthur Sulzberger Jr., is currently defending. Sulzberger insisted on Saturday that gender had no influence on his decision. He illustrated that the accusations of the termination were a notable example of “unequal treatment of women in the workplace” and were completely false. He contested that the termination was predicated in the best interests for the company.

The Wednesday announcement of Abramson’s termination incited outcry from the public and news sources. The former Washington bureau chief was the first woman to be appointed as the Time’s executive editor. Sulzberger asserted that her management of the news division “was simply not working out.” He cited allegations from her newsroom colleagues, coming from both men and women, about Abramson’s ineptitude, which included: public mistreatment of colleagues, arbitrary decision making, inadequate communication, and a failure to consult and bring colleagues with her. Sulzberger said he and Abramson had many conversations concerning the operation of the newsroom. According to Sulzberger, she acknowledged the issues and agreed to overcome them, but despite his personal wishes to see her succeed, he concluded that the she had lost the support of her colleagues and could not gain it back. He also added that her severance package was very complimentary and 10 percent higher than Bill Keller’s.

Abramson’s former boss’s defense against her firing has not satisfied some members of the press. Sulzberger described that neither Abramson’s termination, or her employment, have any indication of the Time’s gaps in wages between men and women. However, a reporter from The New Yorker described that during her employment, Abramson was getting paid less than Keller. According to the reporter, Abramson’s starting salary in 2011 was $475,000. Keller’s salary was $559,000 that year. It was then only raised following protest to her superiors. She also illustrated that her salary as managing editor was smaller than her male counterpart John Geddes’s compensation, and her salary as Washington bureau chief was $100,000 less than her male successor, Phil Taubman. Seth Millstein, from Bustle, stated that it was suspicious that Sulzberger kept using the word “comparable” when describing Abramson’s compensation. Millstein described the use of the word as vague and evasive. Sulzberger stated that he is a supporter of equal rights for women in the workplace. A reason he cited for urging the public and reporters to look elsewhere for examples of inequality, because Abramson’s firing was not one.

Abramson’s former boss continued to defend the firing against accusations of sexism by citing the history and workplace mood of The New York Times. Sulzberger stated that Abramson’s former co-workers were surprised by the termination, but understood the reasoning behind it. He went on to exclaim that “we are very proud of our record of gender equality,” and that many “key leaders,” in both the business and newsroom side, are women. He concluded by urging the public and reporters to judge them objectively and fairly, while keeping the company’s history of performance in mind.