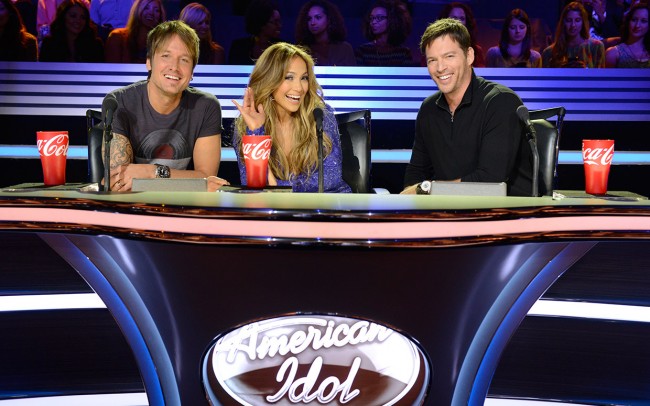 On the finale of American Idol, tables were turned that brought Idol to a whole new level. Not only did Ryan Seacrest sing a a duet with Richard Marks but all three judges, including judge alumni Randy Jackson, grouped together to do one of the hottest, energetic performances ever to be on American Idol. The entire finale was filled with excellent performances and moments that transcended the viewer a captivating state of happiness.

Before the absolute show stopping, celebrity jam session rocked out, there were other very notable performances last night on the shows grand finale announcing this year’s American Idol. When Caleb and KISS sang a medley of Love Gun and Shout it Out Loud the entire audience were rocking. Caleb and KISS took the viewers in a time warp and it was a very historic moment for the show.The fact that KISS was there performing sealed the deal for most as it was a rare treat indeed to see the iconic rock band back in the forefront. Caleb had chosen KISS to be the band to do a song with because KISS happens to be Caleb’s younger brothers number one band.

The performances just started to go uphill from there. Jena Irene sang Ain’t it Fun with the Idol contestants favorite band Paramore after singing Decode on piano by the same band. The performance was beyond fantastic. Towards the end of the duet, big, yellow balloons dropped from the cieling onto the stage and over the audience and judges heads. The scene became so filled with joy, music and dance that, again, it brought this American Idol episode to rank as one of the best Idol finales, ever! It was so fabulous that even Seacrest, at the end of the song, said to Hayley Williams, Paramore’s lead singer, “That was so much fun, you have got to come back.” And indeed, it was so much fun.

No one was prepared or even knew how to react when host, Ryan Seacrest began singing Right Here Waiting by Richard Marx, only to be joined by Marx on the piano. The viewers quickly pieced together that Seacrest was fulfilling a long time dream and maybe his mother had something to do with that dream coming true. Shots of Randy Jackson and Seacrest’s mother high five during the performance could have given that idea away. All in all, it wasn’t the best vocal of the evening but just watching Seacrest let go and sing with Marx was joyous all the same. Idol fans connect with Seacrest and to see this side of him was refreshing.

Jennifer Lopez sang First Love earlier on in the show and it was a stellar performance. Lopez ended the song with a great dance number and the performance even beat out the one Lopez made at the Billboard Music Awards that aired on Sunday. Then came the big show stopper.

All three judges, Harry Connick Jr., Keith Urban and Jennifer Lopez got on stage with Idol judge alumni, Randy Jackson and mesmerized the viewers with a rendition of True Colors. The Judges of old and new then rocked it out to Go Your Own Way by Fleetwood Mac. The chemistry, friendship and professionalism the gang exuded was epic. It was as if the viewers had a sneak glimpse of watching a celebrity jam session.

The surprise is that how could a show that had explosive acts have such disappointing ratings? The show received 6.6 million views and was the lowest ranking Idol show in history. Maybe after seeing the video of last night’s mind blowing performances, fans will make sure to tune in to season 14 more religiously. The American Idol Judges rocked the Idol stage like no other in a finale show and have proven to be the best judge trio since the original trio of Simon Fuller, Paula Abdul and Randy Jackson.