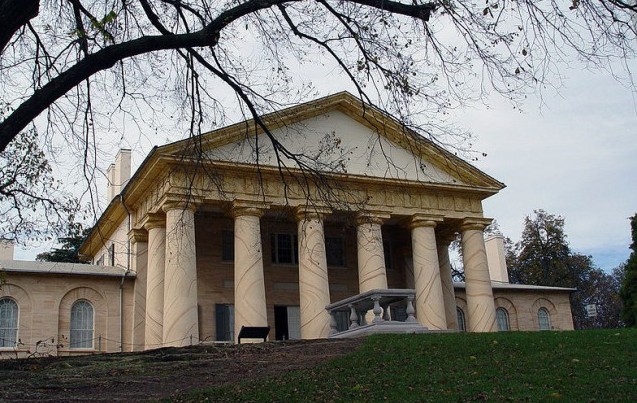 Arlington National Cemetery is America’s pre-eminent military burial site. It has grown to over 400,000 graves of men and women who have served and protected the United States since 1864. The property did not start out as a cemetery but as a 1,100-acre private estate owned by George Washington’s adopted grandson, George Washington Parke Custis. His purpose was to construct a mansion that would be a living memorial to the former president. However, the turmoil of the Civil War brought about uncertainty for Arlington House as it changed from a private estate to becoming part of Arlington National Cemetery.

Custis had inherited the site from his father, John Parke Custis, who was Martha Washington’s son from her first marriage. The grandson, having grown up in Mount Vernon after his father died, originally wanted to name his site Mount Vernon in honor of Washington’s home. He decided, however, to name it Arlington after the ancestral home in Virginia of the Custis family.

He hired English architect George Hadfield to design the estate that would be on a hill above the Potomac overlooking Washington, D.C. The Greek Revival style home had a north and south wing, and a center section with eight columns around the outside portico. Each column had a diameter of 5 feet around the base. The quality of Hadfield’s work was already known since he had supervised part of the U.S. Capitol construction.

Custis built the north wing first in 1802. He used part of it as his residence and the rest for storing items that had belonged to George Washington: portraits, letters, clothing and other memorabilia from Yorktown. Two years later, in 1804, the south wing was finished, and the center section was completed in 1818. The entire mansion had taken 16 years to build.

In 1831, Custis’ daughter, Mary Anna, married West Point graduate Robert E. Lee. The couple lived at Arlington House until the Civil War. Lee was appointed superintendent of the U.S. Military Academy at West Point in 1852 and returned home in 1857 after the death of his father-in-law to serve as executor of the estate. The will stipulated that Mary Anna could control and live at Arlington House the rest of her life. After her death, it would go to her oldest son. Robert E. Lee never owned the property outright but was the custodian and executor.

Once the Civil War began, Arlington House would be on an irreversible course of changing from a private estate to becoming part of Arlington National Cemetery. Virginia joined with the Confederacy and seceded from the Union in April 1861. Lee resigned from the U.S. Army to accept a position as major general in the Virginia military. He wrote to his wife regarding her safety and the impending war, advising her to pack and go some place where she would be safe. He anticipated losing their home and property but told her no one could take away their memories.

Shortly after the Lee family had left Arlington House in May 1861, union troops led by Brigadier General Irvin McDowell crossed the Potomac and set up military installations on the grounds. When Lee’s wife did not appear in person to pay the property taxes, the entire estate was seized by the federal government. It was offered for sale to the public on Jan. 11, 1864. A tax commissioner bought it for government purposes for “war, military, charitable and educational” usage.

One of the provisions in Custis’ will was his instruction for all slaves to be given their freedom and educated. Lee hoped this request would be honored. Federal officials freed the slaves and created Freedman’s Village, a community near what is now the Memorial Amphitheater. Dedicated in December 1863, more than 1,000 former slaves received land from the government where they could live and farm.

Brigadier General Montgomery C. Meigs wanted to make Arlington House uninhabitable in case the Lee family ever returned. The first military burial on the property was on May 13, 1864. Meigs officially established Arlington National Cemetery as a military cemetery on June 15, 1864. He had a 20-foot-wide stone and masonry burial vault constructed in the rose garden and filled it with the remains of 1,800 casualties from the Battle of Bull Run.

Even though Lee’s wife held the title, neither of them ever returned to Arlington House nor attempted to recover their control of it. They moved to Lexington, Virginia where he was president of Washington and Lee University until he died in 1870. Both of them are buried at the university campus chapel in the Lee family crypt.

Lee’s eldest son, George Washington Custis Lee, filed a lawsuit to reclaim Arlington House and the original 1,100 acres. He said he was the legal owner according to his grandfather’s will and that the property had been seized illegally. The case reached the U.S. Supreme Court. In a 5-4 decision, all the property was returned to him in December 1882. Congress then purchased the it from him for $150,000 on March 3, 1883. Freedman’s Village no longer existed but the graves of community members remained in place.

The estate was used as a military reservation until 1925 when Congress passed legislation to have the house restored as it would have looked when Robert E. Lee lived there. It has been under the National Park Service since 1933. Arlington National Cemetery continues to be under the Department of the Army.

Arlington House is known as the Robert E. Lee Memorial and also as the Custis-Lee Mansion. Custis and his wife, Mary Lee Fitzhugh, are buried on the property. The house stands as a symbol of American history and has been on the National Register of Historic Places since 1966. Arlington House went from a private estate to military burials during the Civil War, but now looks out over Arlington National Cemetery in peace.